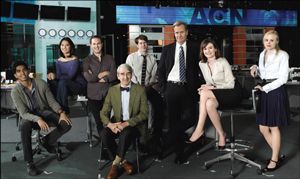 “The Newsroom” cast: Dev Patel, Olivia Munn, Thomas Sadoski, Sam Waterston, John Gallagher Jr., Jeff Daniels, Emily Mortimer, Alison Pill LOS ANGELES—The rollout of the HBO series “The Newsroom,” a drama that unfolds in the pressure-cooker world of network news production, has been a success. In a key scene early in the pilot, news anchor Will McAvoy (Jeff Daniels) delivers an impassioned indictment of American exceptionalism, and that idealistic speech made some well-timed waves on the Internet. Initial viewership was healthy, and the critical response was generally positive. A day after the second episode aired, HBO announced that the show had been picked up for a second season.

Show creator Aaron Sorkin, whose writing credits also include the features “A Few Good Men,” “Charlie Wilson’s War,” “The Social Network” and “Moneyball,” makes sure that there’s plenty of wit, dry humor and subtext behind the brainy banter. Emily Mortimer plays a producer who happens to share a romantic past with McAvoy, and Sam Waterston is the network news division president who watches over the proceedings. Olivia Munn, Dev Patel, John Gallagher Jr., Alison Pill and Josh Pence round out the cast. Recent episodes have stirred controversy by showing the McAvoy character decrying threats to democracy in the form of political advocacy by shadowy billionaires.

Cinematographer Todd McMullen (center, plaid shirt) and his crew on location in West Hollywood for “The Newsroom.” Sorkin had entertained audiences with sneak peeks behind the curtain of fictional television shows before, with “Sports Night” and “Studio 60 on the Sunset Strip.” His other TV credits include “The West Wing,” which changed the rules in terms of how much dense dialogue TV audiences could follow. Tom Del Ruth, ASC, the cinematographer for much of “The West Wing,” adapted his techniques to this smart, wordy brand of television writing, and his distinctive work was recognized by his colleagues in the American Society of Cinematographers with six ASC Award nominations and two wins. His work on the show also brought him two Emmys.

UNORTHODOX APPROACH
For “The Newsroom,” cinematographer Todd McMullen also uses an unorthodox approach that is designed around the main newsroom set, built to generous proportions at Sunset Gower Studios in Hollywood. While the pilot was shot on Super 16 film by Barry Ackroyd, BSC, the episodes are shot with two or more ARRI Alexa digital cameras configured for a very simple on-set procedure that eliminates the need for a digital imaging technician. An hour-long episode usually takes nine or 10 days to produce, including two or three days on location.

McMullen is best known for shooting more than 40 episodes of “Friday Night Lights,” another show that benefitted from a distinctive shooting style.

“On ‘The Newsroom,’ the writing is so great,” he says. “Our goal is to capture that in a live play, so to speak,” he says. “It’s more freeform, without a lot of premeditated traditional coverage. We don’t shoot a line of dialogue one way, cut, and catch the next line another way. We might do six pages in one shot. It’s designed to give the actors room to lay it all out there and tell the stories the way they need to. It’s a really organic way of doing things.”

Thomas Sadoski as Don Keeger, former executive producer of “News Night,” Sam Waterston as news division president Charlie Skinner, and Jeff Daniels
Hero shots of the anchor delivering the news are done in the straight-on, flat-lit style of a news program. Meanwhile, the behind-the-scenes crew is shot in a more spontaneous, reactive style. “We play it live,” says McMullen. “It’s fun, because you have that one big setup, and you do a couple of takes, and after a few pages you have the whole scene. That’s fantastic when you’re trying to cover a dozen or more pages a day.”

The camera operators are tasked with finding interesting angles from around the high-tech newsroom set, which is designed very similarly to an actual full-sized newsroom, including overhead light grids that facilitate 360-degree shooting. Shots usually stay to the long end of the Angenieux Optimo 24-290mm zoom lenses, sometimes leaving foreground and background elements soft, with the cast sharp in the mid-ground. Sudden frame size adjustments, accomplished with the zoom as a reaction to dialogue, are part of the style.

“We keep the camera moving a little bit, often on dolly track, and follow the characters and the dialogue,” says McMullen. “We keep it alive that way, and we love shooting like that. You get great stuff.”

SHADOWS AND LIGHT
Lighting is run through a complex dimmer system that allows McMullen to signal to the audience that McAvoy is on the air. He says that the sensitivity of the ARRI Alexa camera allows him to think differently about light. For example, the many prop monitors displaying video around the newsroom set throw a surprising amount of light that is sometimes useful.

Todd McMullen “The way the camera picks up into the shadows is really something else,” he says. “It becomes more about controlling and shaping the light. If I’ve learned anything with this camera, I’ve learned how to control the light—how much less light I need, and how much further I can push. The Alexa is definitely the most natural, film-like digital camera. It’s great for television production.”

The Alexas record Apple ProRes 4444 to internal SxS cards. Three backup copies are made and a shuttle drive is sent to Encore Hollywood for post work. McMullen uses a standard ARRI film LUT for the images he sees on set.

At Encore, McMullen collaborates with colorist Pankaj Bajpai, who helped him develop the right approach to color and grain for “The Newsroom.”

“My main concern is to keep an eye on the exposures, and to avoid making them too perfect,” says McMullen. “If it’s not matching with a direct cut, I’ll ask him to do a little work. But I am not going to get overly precious about all this. That is what renders the look that I like.”

Bajpai notes that they took some visual cues from the Super 16 images in the pilot. “Todd did the heavy lifting by lighting the show in a very filmic way,” he says. “The Alexa makes beautiful pictures, but when you compare the image characteristic response of Alexa to that of 16mm film, there are some interesting differences. To me, those subtle differences give the two capture mediums their aesthetic uniqueness. Our challenge was to learn from the best of both and accomplish the look most effective for the visual storytelling.”