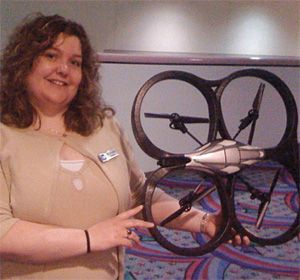 Michelle Ingram, Chyron marketing coordinator, with the Cloud Cam.
A camera that flies through the air at the touch of a finger is just one of the innovations Chyron added to its lineup of graphics tools during the 2011 NAB Show.

The Cloud Cam, a lightweight hovering camera controlled via an iPad, whirred around the company's press conference, highlighting how new technologies like tablets may be used to both watch images captured by the robotic camera and control the camera itself.

Enhancements to Chyron's HyperX3, LEX3 and MicroX graphics system include an expanded range of capabilities that offer faster rendering. The company also updated Channel Box2 to streamline logging and playout.

The Melville, N.Y.-based company celebrates its 45th anniversary this year, no small feat in a "technology industry that moves as fast as this one does," said Michael Wellesley-Wesley, president and CEO of Chyron. "It's all about innovation, innovation, innovation." © 2011 NAB