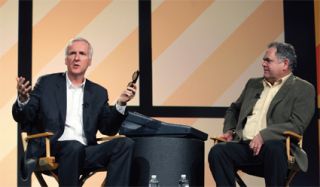 Attendees who walked through the front doors of the 2011 NAB Show Convention & Exposition found themselves in the midst of an altered digital media environment, one fraught with complex regulatory hurdles, increased competition and tricky technical questions.

James Cameron (L) and Vince Pace Like the theme of this year's convention, the industry's focus was on the delicate art of integration—finding a way to create and move content seamlessly across myriad mediums.

"We come for different reasons, but we all face the same challenges," said NAB President and CEO Gordon Smith at the NAB Show Opening on Monday morning.

The NAB met those challenges with a mix of sessions, keynotes and an ongoing commitment to remaining vigilant in representing broadcasters on issues that are changing the industry, Smith said, be it mobile DTV, spectrum allocation or retransmission consent.

By laying the groundwork for the change the industry wanted to see at the show, the industry must move forward together, he said.

Looking into its past briefly, the organization took a moment to honor Edward O. Fritts, who labored for 23 years as president and CEO of the organization. For his efforts in promoting the cause of the broadcast industry, Fritts was awarded the NAB Distinguished Service Award.

The organization also looked ahead to what the future holds.

The two announced plans to form a new company to support the development of 3D programming—known as the CAMERON–PACE Group—that will have its eye on building 3D camera systems and accelerating the acceptance of 3D programming across film, live television, sports and education.

Following in the footsteps of the 3D technology that the two innovators collectively built, including the FUSION 3D system, the new company will be focused on creating both technology and processes to allow for the ubiquitous acceptance of 3D.

"We realized that broadcast is the future of 3D," said Cameron, whose film "Avatar" was shot in 3D. "And [we started to think about] how it might impact your business going forward."

To Cameron and Pace, one factor that has limited the mass acceptance of 3D is the realization that the process of making stereoscopic programming doesn't fit the traditional 2D model. And that is a problem.

(L to R) NAB joint Board Chairman Steve Newberry, Former NAB President and 2011 DSA recipient Eddie Fritts, and NAB President Gordon Smith Creating programming for 3D has to be "just as good as a 2D production," Cameron said. "One of the myths about barriers to entry into the world of 3D is that you have to start over from scratch. But it's exactly the opposite."

In other words, to grow the acceptance of 3D, content creators must shoot in 3D with the same expert cameramen and rely on the same talented production personnel who work on 2D programming, but with ancillary assistance from 3D experts on the side.

"We want to make 3D not special; that is, in the same way that color is not special," Cameron said. "3D is the last holdout in terms of our sensory experience: First it was sound, then color, then widescreen. 3D is a basic, fundamental aspect of the way we see the world. It's the last big thing. After that, it will all be nuanced."

Calling it akin to the Wild, Wild West, the current state of 3D production is still in a bit of chaos, Pace said. "A confidence-building needs to occur," he said. "We want you to do what you do best, and here are the 3D tools to do that."

The industry needs to work to change that.

After all, stuck with the least-valuable camera spot on a golf course creates less-than-impressive 3D footage, Pace said. But by beginning to take advantage of the personnel and expertise afforded 2D productions—in one example, by piggybacking 3D cameras and control technology atop 2D cameras—3D will begin to find an even wider market.

"For broadcasters, the foundation of what you've currently done will translate well to 3D, and you'll take it even further from there," Pace said.

The NAB Show Opening session and keynote was sponsored by Blackmagic Design. © 2011 NAB