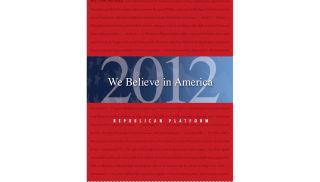 WASHINGTON: The Republican platform this year calls for an inventory of the airwaves, while the Democrats merely mention finding more “wireless spectrum.”

“We call for an inventory of federal agency spectrum to determine the surplus that could be auctioned for the taxpayers’ benefit,” the GOP platform states after criticizing the Obama Administration for not yet having auctioned spectrum and for its net neutrality rule—“trying to micromanage telecom as if it were a railroad network.”

The DNC platform says nothing about a spectrum inventory, but rather reiterates the president’s goal to secure more spectrum for wireless broadband.

“President Obama has committed to ensuring that 98 percent of the country has access to high-speed wireless broadband Internet access,” the document states. “We are finding innovative ways to free up wireless spectrum and are building a state-of-the-art nationwide, interoperable, public safety network.”

A spectrum inventory is of particular interest to broadcasters, who stand to lose 40 percent of the spectrum they now occupy under the Obama Administration’s National Broadband Plan. Lawmakers on both sides of the aisle have introduced spectrum inventory legislation since March of 2009—a full year before the NBP was delivered to Congress by Federal Communications Commission Chairman Julius Genachowski.

The NBP recommended reallocating 40 percent of the TV broadcast spectrum for wireless broadband without first taking a full accounting of all licensees. Under pressure from lawmakers to produce an updated inventory, Genachowski told Sens. Jay Rockefeller (D-W.Va.) and John Kerry (D-Mass.) in July of 2010 that one was underway.

“I agree that developing a complete survey of the nation’s existing spectrum allocation, assignment and utilization is imperative and commission staff have begun work to create such an inventory,” Genachowski wrote to the lawmakers at the time.

However, no such inventory has been produced, nor has the FCC produced the Allotment Optimization Model it used to determine that 40 percent of the broadcast spectrum could be reallocated without knocking out TV stations or reducing coverage. Rep. John Dingell (D-Mich.) has repeatedly pressed for the FCC’s AOM to no avail, telling Genachowski at a hearing in July that withholding it could get the FCC sued.

Congress granted the FCC the authority to auction off TV airwaves earlier this year to facilitate the reallocation, intensifying the call for an inventory. Maine's Republican Senator, Olympia Snowe, co-sponsored the most recent inventory legislation with Sen. Mark Warner (D-Va.) The bill would provide an inventory how each spectrum band is being used, and by whom, and create a website where the public could access the information. The bill has not advanced. Snowe, one of the more vocal proponents of a spectrum inventory, will retire from the Senate when her term ends Jan. 3, 2013.
~ Deborah D. McAdams