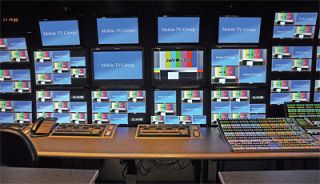 ALEXANDRIA, VA.
There has been lots of big news in the television industry over the past 10 years, but one little story has almost been overlooked. Somehow, as the industry concentrated on DTV transmission and file-based storage, there was a fundamental shift in the way we monitor the programs that are stored and broadcast.

Mobile TV Group uses Apantac multiviewers in its 25HDX truck. This shift can be explained in one word: multiviewers.

The idea behind multiviewers—displaying several video signals on a single screen—isn't new. However, the technology really took off with the advent of large, high-resolution inexpensive flat-screen displays.

"Using multiviewers is much more energy-efficient because you don't have lots of little monitors creating heat," said Adrian Hepes, technical director for TV2GO, a mobile production company based in Toronto, Ontario. "Also, the same video on two different monitors is never going to look identical, but on the same monitor the pictures are identical."

Multiviewers are now used throughout the industry but have become particularly popular for remote production. As the picture quality and resolution of flat-panel consumer displays improved, it became possible to put a dozen or more images on a single, lightweight and space-efficient monitor. In mobile production, multiviewer systems are as prized for their low energy usage as they are for their compact and wall-hugging shape.

TV2GO uses the MV-410HS and MV-16S multiviewers from For-A. The MV410HS is a four-image unit with variable screen positions and sizes, as well as eight-channels of on-screen audio metering; the MV-16S can show from five to 16 images on a single screen, and has presets for screen sizes and positioning.

In TV2GO's master control room, the For-A MV-16S provides a 16-screen display on a 65-inch high-end consumer monitor, using the DVI output of the MV-16S converted to the monitor's HDMI port. Hepes particularly appreciates the ability of the MV-16S to handle different monitor configurations for different clients at the push of a button.

Many companies make multiviewers, and there is a wide range of options from simple quad-screen displays to dozens of images with on-screen waveform monitors and vectorscopes. Multiviewers also are finding their way into other products, such as routing and production switchers.

Sports is perhaps the bread-and-butter of remote production. Mobile Television Group has 22 production trucks across the country, including the 25HDX that houses approximately 50 Tahoma series multiviewers from Apantac.

"For us, the first issue is the quality of the image, and the Apantacs look very good," said Philip Garvin, general manager of Mobile Television Group. "The second thing is flexibility and versatility, and that's good too."

Some monitor manufacturers build the ability to display more than one image into a monitor, such as the TVLogic LQM-241W, a 24-inch monitor with a native resolution of 1,920x1,080 pixels and the ability to display up to four images simultaneously. The unit also has built-in waveform/vectorscope and up to 16 channels of on-screen audio monitoring, and it can be rack mounted.

Billerica, Mass.-based Broadcast Pix builds a multiviewer into its production switchers. A Broadcast Pix Slate 1000HH switcher with a built-in multiviewer was used to produce red carpet video from the recent Golden Globes awards, for broadcast on NBC.com.

AMV outfitted its new Epic 3D truck with Miranda Kaleido-X 3D multiviewers. "The big advantages of multiviewers are that you save weight and power," said Lee Blanco, director of engineering for AMV. "The reason we chose Miranda this time around was the 3D capability."

AMV uses Sony 3D displays in Epic, and expects to do its first 3D shoot in August.

Snell's new MV series of multiviewers can accept up to 64 input signals and spread the images over two 1080p displays. The MV series allows configuration of the size and location of the images, and can display up to 16 channels of audio per image.

"We have two truck builds going on simultaneously, and we're using [Evertz] VIPX multiviewers for monitoring throughout the truck," he said. "Game Creek has been using Evertz modular gear for the last six years on previous HD truck builds for conversion and signal distribution. Over the past few truck builds, VIPX multiviewers have been key to our success as we transitioned away from traditional CRT technology."

Doing more with less will always be successful in business, and multiviewers are a perfect example of that philosophy. Less weight, less power, less space, fewer components… these are important considerations in television facilities, especially when you take production on the road. Multiviewers today provide just about any type of monitoring experience, and look good doing it.