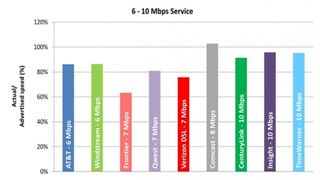 Internet service providers on average are delivering 96 percent of their advertised speeds during peak usage hours, according to the findings of a report released last month by the Federal Communications Commission’s Office of Engineering and Technology and Consumer and Governmental Affairs Bureau.

The report, “Measuring Broadband America Report,” is a follow on to last year’s report by the agency, which found that in August 2011 the ISPs were only delivering 87 percent of their advertised speeds during peak usage between 7 p.m. and 11 p.m. on weekdays.

Regardless of the technology in use, the quality of streaming video will be affected by the speed tier in use, the report said. The report pointed out that SD video is normally transmitted at 1Mb/s to 2Mb/s, which compares the 5Mb/s or more needed to transmit a single 1080p HD video. The report advised consumers to match the tier of service they select to the speed required for the type of video streaming they intend to do.

The report also found improvement in the delivered vs. advertised download speed between the ISPs’ 24-hour average and their peak period average. This year, there was a 3 percent decrease in performance between the 24 hour and peak averages vs. last year when the figure stood at 6 percent, the report said.