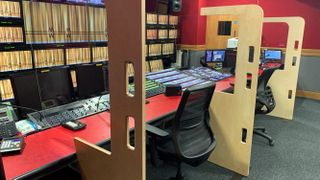 LONDON—One of the many unexpected results from the coronavirus crisis is the important role furniture now plays in both enabling people to carry on working away from their offices and helping them to socially distance when they are at their facility. For broadcasters, specialist technical consoles and desks have long provided a comfortable, ergonomic environment for very specific jobs, such as sound mixing, video editing and color grading. Now these are allowing those tasks to be done either safely at work or remotely.

In some ways, however, this necessary but occasionally taken for granted market was already adapting to changing broadcaster requirements. New studios and facilities are smaller than their predecessors. This is due partly to modern equipment being both more compact and software-based, which enables a large number of functions to be carried out on either dedicated hardware or a laptop computer. There are also likely to be fewer personnel in a control room, although separate, designated areas for audio, lighting and production are still the norm.

“There’s certainly been shrinkage in terms of studio and suite size, with less equipment installed,” observes Ryan Haberman, chief executive of Forecast Consoles in Hauppauge, N.Y. “But now [since COVID-19] there is a lot of change and we don’t know exactly where things are going. With some broadcasters we have seen a lot of working from home, collaborating over Zoom calls, but those with larger facilities have been putting people in separate rooms for sound, lighting, direction and so on.”

Jansen Hahn, chief operating officer of TBC Consoles in Edgewood, N.Y., does not think there has been a “seismic shift” in the size and shape of facility spaces and the furniture being requested post-pandemic, merely a faster continuation of what was already happening.

“Open offices were all the rage a couple of years ago but there has been a migration from those to smaller edit suites,” he says. “There has been a lot of talk about how to respond post-pandemic and we’re seeing different approaches. Some broadcast staff are doing less intensive work at home and then coming into the facility for a day to finish off. There are fewer people in control rooms and more physical separation between operators.”

Pre-pandemic, Hahn says, there was already a trend towards isolated working areas, particularly in news.

“We were seeing a lot of automation being used and the newsroom staff were working in pods at U-shaped consoles,” he explains. “What has changed now is there is more emphasis on separation between the operators, sometimes with a physical barrier, although partitions are nothing new.” In May, TBC announced a range of partition options to meet social distancing requirements and enable workspaces to be modified. These can be added to any console in the current TBC range, with transparent flexiglass available to facilitate collaborative working.

U.K.-based Custom Consoles has similarly been supplying its new Operator Safety Screens to clients for attaching to furniture already installed in facilities. Among those who have added these partitions are Al Jazeera, Amazon Prime, IMG, QVC and Racing UK. BBC Studioworks has put Operator Safety Screens into all its control areas, including the production gallery for the TC1 studio at Television Centre in west London. The screens have been designed for Customer Consoles’ Module-R range but can be fitted to not only other models in the manufacturer’s portfolio but third-party furniture as well.

The forward end of each Safety Screen is a large transparent panel that overlaps the desk. This lets through a lot of light and creates a line-of-sight to video monitor walls for the desk operators. Meryl McLaren, commercial director at BBC Studioworks, commented that the partitions “enhance our health and safety measures” and provide “a reassuring level of protection for our staff and clients.” Gary Fuller, sales manager with Custom Consoles, adds that the screens work in conjunction with mandatory temperature checks, UVC cleaning, one-way pedestrian routes and operating protocols to minimize any risk of infection as much as possible.

“The key change caused by the pandemic itself was that broadcasters realized they needed to create the safest possible working environment for their staff,” Fuller said. “BBC Studioworks was the first to approach us and we were able to respond very quickly with a design that we now offer as the Operator Safety Screen. Demand has proved very high and we have sold in excess of 350 since we started producing them in March.”

Because home working is, by its very nature, a more solitary pursuit, there is no need for partitions or screens; but replicating a proper working environment away from a facility has been crucial in ensuring comfort and productivity during the various stages of lockdown. As soon as isolation rules were introduced—and in some cases, before—broadcasters and facility owners instructed editors, sound designers, graders and other creative-technical staff to work from their homes as much as possible.

Forecast Consoles has a history of designing desks for remote working, having started out catering for the home music recording studio boom of the 1970s.

“We were already designing home working furniture anyway,” Haberman said, “but now people are going for shrunken-down versions of studio consoles, only for the home rather than an edit suite. It’s what companies would be putting into a studio any way, only 4-feet wide and 2-feet deep instead of 8-feet wide and 3-feet deep.”

Haberman says Forecast is offering a range of sizes and shapes to fit people’s homes and the space available. “Editors who live in non-metropolitan areas [in bigger houses] are getting fuller size desks,” he explains. “We’re also selling additional support arms, which allow people to mount monitors on the wall rather than take up space with a floor or desk stand.”

As much as, Haberman observes, “home working is becoming a thing,” there is still a need for some degree of communal working to allow staff to ask for advice or highlight problems without having to book a Zoom session.

TBC’s Hahn agrees, saying that “people still have to go to work to do high-end things,” such as a full drama or theatrical sound mix.

“The broadcasters and facility owners still want to keep the density low, having designated areas and labelling for different operators,” he said. “We’ve also been asked about walls to create one-way corridors and partitions that light up. They’re all things people haven’t needed before but they are thinking about them now.”

Which is a move on from thinking about desks or partitioning walls as merely something to place your coffee mug or hang your coat.