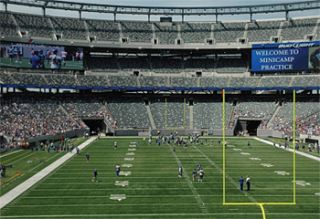 EAST RUTHERFORD, N.J.
As the NFL plans its first pre-season face off between the Giants and Jets at the $1.6 billion New Meadowlands Stadium August 16, stadium officials predict the venue will be hot-wired with double branded entertainment to spur fans on.

"We want to encourage fans to be up and loud," said Don Sperling, vice president and executive producer, Giants Entertainment. "It's a distinct advantage to our team."

His August 16th rival had similar thoughts on the cranked up in-stadium experience.

"It's going to summon you to be a part of the game—impossible to ignore," said Rich Gentile, senior director, broadcasting and multimedia production for the Jets.

"It's basically like a cable headend on steroids," said Brickman. "It's totally addressable, so I could send 2,200 unique pieces of content to each of our 2,200 screens. We can set up fans zones, sponsor zones, we can have specialized feeds, we can do specialized stunting—if there's a touchdown you can get various messaging to concession stands [opening up the action there so the fans don't run away]. We can combine data and video very easily, customize statistics. It's also very easy for us to brand the facility [Jets] green or [Giants] blue on all 2,200 screens."

Woody Johnson, owner of the New York Jets, checks out the new stadium during a recent team practice. Photo by Al Pereira Giants and Jets game ticketholders will get additional IT perks, ranging from statistics-enhanced, multiple-angled replays to alerts for sponsored activities and vendor bonuses. WiFi service is available anywhere in the stadium, including the 82,566-seat bowl.

"It will allow the fan to get a deeper immersion into the football experience," said Brickman. "You definitely want to come here to see everything that's going on, from the activities that we'll have around the concourses before the game, bands sponsored by sponsors, tailgate events."

While doing the utmost to cater to its ticket holders, the stadium has also provided broadcaster perks.

The site was built from the ground up as a fully ready, plug-and-play HD stadium, according to Brickman, with an eye to ensuring that broadcasters can get "that shot and the audio they really want." CBS took the lead in representing broadcasters' interest and oversaw the wiring.

"We spent a lot of time with the networks [CBS and Fox] on camera angles and looks—making sure there were no worries about waving hands, especially if they have foam fingers—and working with their safety crews," said Brickman. "Additionally, we had a program with our local broadcasters where they came in and picked their preferred locations. Unlike other programs, where they're billed per access, we charged them up front to build up their infrastructure and now they're welcome to use it for the rest of time."

"They went out of their way for safety and to accomodate broadcasters' sight lines," said Bruce Goldfeder, director of engineering for CBS Sports, citing a record 37 different broadcast camera locations for the networks. He said the stadium built custom baskets, hung underneath the upper level right in the center of the goal posts, to accomodate the camera and the operator because the initial end zone positions were too high.

Donna Pisciotta, director of production for WNYW FOX5 and WWOR MY9, appreciated the more cost-effective coverage enabled by a direct fiber connection from prime locations in and around the stadium.

"Some of these locations are on the field and outside the locker rooms," said Pisciotta. "The other plus is that the costs for these fiber connectivity stations are one-time charges. Once you pick the locations, you are given the costs for your choices and are billed—there are no further charges."

Brickman nixed rumors of 3D coverage this season, though down the road he foresaw installing 3D hardware to show 3D games in some of the stadium's club rooms.

"We don't have anything on the road map as yet, we need to see 3D developed more," he said. "Certainly we're working with our network partners."

"We have over five million feet of cabling for IT, broadcast and audio," said Brickman. At presstime, the 750 square-foot Control/Video Replay Room was still in build mode. Built out as a high-end production truck, it is the nerve center for all of the entertainment that's in the walled garden of the stadium, including DirecTV's "Sunday Ticket," regular cable services, specialized trucks, and special robotic POV [Sony or Canon] stadium cameras. The control room abuts a 1,150 square-foot data center.

"We can distribute coverage to the fans, the networks, the clubs, the suites, anywhere," said Brickman. "It's designed specifically for the needs of a video replay room; it's U-shaped because everybody's got a slew of monitors—it allows us to have much more monitoring of the various distribution points."

The stadium has installed cameras in the coaches' booths, interview rooms, concourse and club areas, and is working with providers to integrate the latest cable-controlled camera systems. A Cirrus Logic CobraNet system manages all of the audio, allowing flexible routing from a club panel in the audio control room.