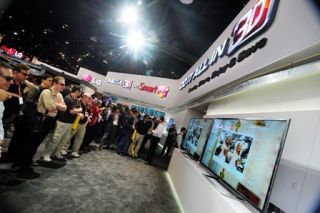 ALEXANDRIA, VA.:—Just when most of the world has settled on 1080p monitors as the standard in high definition, there is increasing talk in the industry of higher resolution monitors—including those for consumer viewing. And bubbling underneath this not-so-gentle push for higher resolutions are standards organizations working on next-generation standards for distribution and even broadcast of this higher resolution.

LG unveiled an 84-inch ultra-definition 4K display at the International CES in January. Known informally as “ultra high-definition TV” (UHDTV), the basics of the technology are not new; UHDTV was demonstrated by NHK as early as the 2006 NAB Show.

What’s new now is the recent announcements by several manufacturers of 4K cameras, as well as the monitors necessary to view the output of the cameras. These 4K monitors constitute the vanguard of UHDTV displays, and more are likely to arrive soon.

Not only are manufacturers of professional equipment turning their attention to UHDTV displays, consumer organizations are watching the technology carefully and devoting some time to stay abreast of developments.

“4K is the latest innovation that will pave the way for the next era in the home viewing experience,” said Gary Shapiro, president of the Consumer Electronics Association. “All parties with an interest in 4K are coming together under CEA’s leadership to form the 4K working group, which will help enhance the viewing experience for all consumers.”

4K FOR OTA?
The CES focuses on products for consumers, but it is not the only organization looking at a possible future with 4K displays in the home. The ATSC is considering UHDTV as part of its ATSC 3.0 initiative.

“We have not made any decisions at this point,” said Mark Richer, president of the ATSC. “There is a growing interest in 4K and 8K UHDTV, but also a strong view that the 3.0 standard focus on mobile and handheld applications that are not likely to require UHDTV.”
Mark Richer
In the near term, true 1080p broadcasting is a likely stepping stone on the way to UHDTV.

If UHDTV displays are to become a significant consumer item, there will need to be ways to deliver the signal to homes. Current Blu-ray disks might work for UHDTV with new compression and encoding methods, and by standardizing on additional layers. Solid-state storage, such as USB flash drives and SD memory cards, can also have enough storage space to possibly work for UHDTV delivery, if the cost of the storage media can be pushed low enough.

However, delivery of UHDTV to the home holds the key to turning a boutique high-end display device into a mainstream product.

“I think it’s likely that some broadcasters in some countries will transmit 4K UHDTV,” Richer said. “It’s too early for me to speculate on the required bandwidth, but some UHDTV content may be delivered in non-real-time.”

An example of non-real-time delivery would be downloading a movie overnight for playback the next day. As for international standards for UHDTV broadcasting, the International Telecommunication Union (ITU) is examining high-resolution systems with an eye on terrestrial broadcasting with its recent recommendations for UHDTV quality standards.
David Woods
The UHDTV tests that have been done so far have used the existing MPEG compression systems, MPEG-2 and AVC,” said David Wood, chairman of ITU-R study group 6, working party 6C, which deals with baseband systems and quality evaluation. “New compression technology, HEVC, will be available in the coming years, and it will certainly make sense to use it for UHDTV if the UHDTV rollout comes relatively soon.”

“Recently, NHK showed the 8K system using AVC carried over two terrestrial television channels with advanced modulation and a total bit rate of about 180 Mbps,” Wood said. “Maybe if HEVC had been used, the figure might have come down to 90 Mbps. We can conclude that terrestrial broadcasting of 8K will need to wait for a few years and a new modulation system, but 8K will be quite possible by satellite broadcasting, and attention at the moment is on the 22 GHz satellite band.

“For the 4K system, it is a different story, and certainly 4K terrestrial broadcasting will be possible with HEVC and a modulation system like DVB-T2,” Wood said. “So, 4K broadcasting will be practical. I guess the bit rate required for 4K using HEVC will be a number in the twenties [of megabits].”

MANUFACTURER INTEREST
Several manufacturers have shown both professional and consumer UHDTV displays. Companies such as JVC, Panasonic and Sony demonstrated 4K prototype monitors in conjunction with their respective 4K video cameras and LG, Sharp and Toshiba showed 4K TV sets at the 2012 International CES in January. At least one company, TVLogic, has been shipping a 4K monitor for more than a year, and Astro Design has several models of 4K monitors.

The TVLogic LUM-560W is a 56-inch LCD display with a resolution of 3840x2160 pixels and 10-bit processing. The company targets the LUM-560W at high-end cinema post, industrial, military and medical applications.

Astro Design has a line of four 4K LCD monitors that range from 28-inch to 60-inch. One example is the 60-inch DM- 3412, which has 10-bit processing and 3840x2160-pixel resolution.
TVLogic targets its LUM-560W 56-inch 4K LCD display to high-end cinema post, industrial, military and medical applications

Viewsonic has shown a prototype 4K 32-inch flatscreen computer monitor, and has even assigned it a model number: the VP3280-LED. Viewsonic says the monitor will be marketed for film studios, broadcasters and photographers, and it might ship as soon as the end of 2012.

Almost as soon as countries standardized on 1080 displays, researchers leaped past the 1080-line barrier to higher-resolution displays. UHDTV displays will likely see quick acceptance among program producers and filmmakers, which will fuel a market for deployment of UHDTV displays for wealthy consumers.

It’s too early to tell if there will be movement toward a terrestrial broadcast UHDTV standard, but distribution by other means will almost certainly follow the sale of such displays to consumers.

Will your current 1080p display become the new unloved NTSC CRT television? Time will tell, and that time is still a few years off.

Bob Kovacs is a television engineer and video producer/director. He can be reached atbob@bobkovacs.com.