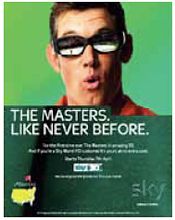 Sky Sports scored a major coup in acquiring the live TV rights to the Masters golf tournament in Augusta, Georgia (held April 6-10, 2011), which had been exclusive to the BBC for 24 years. Upping the ante, it also provided live 3D coverage.

Darren Long, Sky Sports’ Director of Operations, noted that BSkyB had been covering an average of two to three events in 3D per week at press time. He estimated the fiscal year tally for July 2010 through June 2011 at about 160. “Next year we’re projecting about 220,” Long said. “Probably about 75 percent of them are for Sky Sports.”

Helming the gallery at Sky Sports was presentation director Steve Smith, who otherwise serves as Senior Football Director for the network. Smith, a veteran of Sky Sports’ 3D coverage of soccer and boxing matches, had previously been tasked with the 3D coverage of last October’s Ryder Cup (in combination with the 2D conversion provided by European Tour Productions).

Smith is convinced that golf coverage is a natural for 3D. “Of all the sports that we’ve done in 3D, the one that lends itself better than any other is golf because of the nature of the topology: the terrain is brought to life,” he said. “Most other sports are being played on flat pitches.”

As in 2D coverage, golf presents the usual outdoor snags in regard to weather, acreage (versus defined boundaries of play), the aforementioned topology of hills, trees, sand traps, and bodies of water (versus a more uniform playing surface), and equipment/production rules that vary from course to course. Pinpointing the action is also trickier. “You’re trying to spread your rigs around 18 holes and don’t have any idea when any of the individual matches will finish,” said Smith.

The side-by-side, sequential frame sign a l transmitted by satellite to London yielded a few minor technical problems in the early stages, said Smith. These problems were mainly confined to audio. “When we found the hole in the audio we had our own [content] that we called in until we could come to the point when we could rejoin,” he said. “It’s a situation that could happen on any feed – it’s not 3D specific.”

This photo was taken on January 31 at a screening of a Manchester vs. Chelsea football match. Not exactly a golf crowd… Smith was delighted to pick up some production pointers. “I was working on [the presentation] as much to look and see what the American guys were doing in comparison to what we were doing on the Ryder Cup,” he said. “Also to see if there were any technical innovations that we could look to bring into our 3D coverage.”

Most obvious was the differing amount of equipment and its placement.“ The Masters covered [in 3D] from the 10th to the 18th hole,” said Smith. “We had probably fewer rigs [for the Ryder Cup] trying to cover right from the first to the 18th, so we spread our rigs more thinly than our American colleagues did.”

The second most striking difference was CBS’ use of the “shadow 3D” rig, which is designed so that one operator can handle both the 2D and 3D cameras (stacked on top of one another) at one camera position. “The Americans would tie in their convergence points, their focus: if the 2D camera zoomed, then the 3D camera would zoom at a similar ratio,” said Smith. “All of our 3D cameras were independently operated [at the Ryder Cup event].”

Smith acknowledged the efficacy of the set-up for capturing more shots, particularly given the availability of the more flexible 2D options for composition. But he had his reservations, and would like to further explore different rigs and combinations. “It’s an interesting concept, but I thought it slightly compromises the 3D because ultimately 2D has control of the camera,” he said. “2D is more forgiving than 3D in regard to differences in edge variation.”

Steve Smith believes that the equipment’s greater lens capability worked particularly well around the 15th green; enabling the U.S. cameras to optimize a golfer’s stride from the fairway to his next shot by zooming in from a wide to medium wide take. “It gives you that flexibility to alter your frame, depending on who’s in the composition of the shot,” he said. “With smaller lenses, you would struggle to get a shot that would make out [a specific golfer] walking down the fairway – you wouldn’t be able to get a tight enough shot.”

The Shadow 3D rig is designed so that one operator can handle both the 2D and 3D cameras (stacked on top of one another) at one camera position. Photo credit: Courtesy of CAMERON – PACE Group CBS’ ability to get 3D super slow motion footage, which has become a staple in 2D coverage, also impressed Smith, particularly as rendered near the 13th tee. “It brought the swing analysis into your room,” he said. “You felt you were five yards away from Tiger Woods. Feeling that you are standing five yards away from him is a fantastic experience that previously you could only get being on the golf course.”

Finally, both Long and Smith admired the use of jibs. Long noted how jibs better captured movement, particularly during a putt. Meanwhile, the use of jibs at the back of the 17th green and toward the 18th hole especially caught Smith’s attention. “What came across was the topology of the fairways, how hilly the 18th fairway was,” he said. “You have a greater sense of when that ball’s going to drop off the top of the precipice and disappear away from the hole, which is what Augusta is all about – something you could never sense unless you’ve been on the course.”

The additional nod to the terrain and sense of drama also extended to capturing a golfer’s tee off and the reaction of the crowd – which stood in staggered formation behind the tape, turning their heads to watch the ball in flight.

“You get real depth to the picture – it adds a real wow factor to the drama there,” said Smith. “And another jib at the back of the 18th green really gave you a sense of the atmosphere of the occasion: when the crowd surrounding the 18th hole greets the winner."