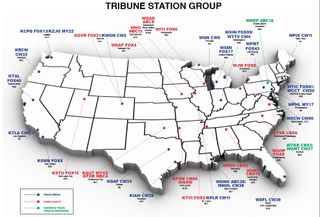 CHICAGO — Tribune announced that the Federal Communications Commission approved its application to assume control of broadcast licenses held by subsidiaries of Local TV Holdings, LLC, paving the way for Tribune to acquire 16 of Local TV’s television stations in 14 markets across the country. The transaction gives the Tribune the largest over-the-air footprint of any broadcast group in the United States at 44 percent of the nation’s 115 million or so TV households. Tribune will rank sixth among groups in terms of number stations with 42.

Tribune’s TV holdings; LLC stations in red.
Click on the Image to Enlarge
Tribune said the commission also has approved the transfer of broadcast licenses for three Local TV stations in Wilkes-Barre, Pa., and Norfolk, Va., to Dreamcatcher Broadcasting LLC.

Tribune announced its intention to buy the Local TV stations for $2.73 billion last July, and soon after, that it would separate its broadcast and print publishing businesses. Tribune emerged from bankruptcy in 2012, having been taken private in 2007 by investor Sam Zell in a highly leveraged transaction.