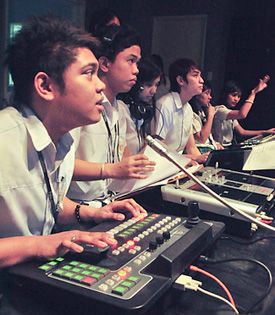 BILLERICA, MASS.: The Department of Communication at Far Eastern University (FEU) in Manila, Philippines recently renovated its video production facilities with a Granite 1000 Video Control Center as part of an upgrade to HD production for FEU’s television production classes.

While Granite has been primarily used for class productions, there are plans to produce a live cable broadcast during the upcoming semester. According to Babsie Morabe, associate professor, FEU Department of Communication, students like the new system, which replaced an aging Videonics switcher. “The industry is moving toward HD production,” he noted, “and the students need to be armed so that when they apply for a production job, they are already well versed in HD.”

Located in the Arts Building, the new production studio is housed in a space that had been previously used as a stockroom. Solid Video Corporation in Makati City, Philippines, supplied and installed the Granite system, and FEU began using it for classes in 2011. The upgrade also included new Sony HD cameras in the studio and HD control room monitors.

Morabe also praised the other integrated tools, including the Harris Inscriber GS CG. “It is a very powerful tool for video mixing and live broadcast integration,” he added. “It greatly improved our productions, since we can come up with real-time graphics anytime.”