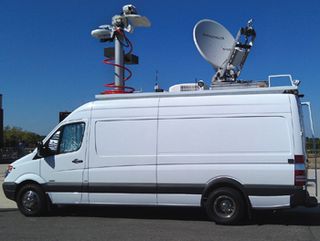 ALEXANDRIA, VA.: Most TV stations with news broadcasts now have studios equipped with HD gear. Their trucks, however, have not necessarily made the transition to HD; even some sizable markets still have network affiliates operating with SD vehicles.

The economy is one reason why—new trucks are a big capital expense and it’s usually less expensive to keep old trucks running as long as possible. It also turns out that there’s more to converting to HD than simply dropping a new HD camera or two into an old truck.

“If a station has a van in a good state of maintenance, an HD upgrade can extend the life of that truck by several years,” said Tom Jennings, president and vice president of sales for Accelerated Media Technologies (AMT) in Auburn, Mass. “We typically recommend stripping all electronics and wiring and re-engineering and reintegrating the HD system rather than just layering it on top of old legacy wiring.

“The conversion to HD has meant a complete shift in thinking for many,” he said. “HD conversions often include a shift to embedded audio and a radically simplified workflow that allows the trucks to be operated by much less experienced operators.”

One station that made the transition to HD ENG was KSHB in Kansas City, Mo., which migrated to HD remotes three years ago, according to Jay Nix, director of engineering for KSHB. Today the station has six fully HD microwave units and two HD satellite trucks.

Nix said that a big part of the solution for KSHB was finding a stable platform for video/ audio switching and encoding before the signal hit the microwave transmitter on its way to the studio. Then, weeks of trial-and-error were necessary to get things working to Nix’s satisfaction.

“It took us almost two months of tweaking the microwave radios’ configuration to find the best quality, while maintaining the forward error correction needed to establish a reliable microwave link,” he said. “Since we use both 2 GHz and 7 GHz in our newsgathering, it was critical to not degrade our coverage distance or lose the locations where we previously had solid shot performance.”

BAS TRANSITION=NEW GEAR
Like many other stations, KSHB had a windfall of new gear as a result of the BAS relocation a couple years ago. The new microwave transmitters have ASI inputs that Nix found were a major help in ENG shoots.

“The workflow of our cameras allowed us to push ASI from the camera to the truck,” he said. “This gives us a cable length of almost 1,000 feet to work with. We also found a high-quality HDSDI-to-ASI encoding platform that allowed us to perform multiple camera shoots without multiple signal conversions before the switcher and microwave unit.”

AMT’s Jennings pointed out that moving to digital makes a big difference in the complexity of the vehicle.

“The requirement to support analog video has more or less disappeared, and the need for gap technologies that cross convert analog signals is disappearing fast,” he said. “As a result, a typical ENG truck can consist of 6-10 pieces of gear and can be built on platforms that are much smaller than have been historically built upon, with no loss of space and absolutely no loss of function.”

AMT has had good results building ENG capability—including a telescoping mast—into a Subaru Forester, which makes for a relatively nimble and efficient vehicle that still has all-wheel-drive for better traction in bad weather.

There are many broadcast truck builders, and each has its own approach to vehicle choice. For example, E-N-G Mobile Systems in Concord, Calif., uses the rugged Ford E-350 truck for its Modulus News Van. The E-350 has a large payload capacity for people and equipment, and its roomy interior gives reporters elbow room to get out of the weather or do some editing.

ENG FROM AN SUV
Wolf Coach (part of defense contractor L-3 ESSCO), uses a full-size SUV for its Wolfpac news vehicle. A Wolfpac can be outfitted with masts up to 42 feet tall, and the vehicle can be fitted with either an inverter or a belt-driven generator up to 6 kW. Next up in size for the Ayer, Mass.-based company is the Coyote series, which uses Ford E-350 and other large vans for a more spacious and capable ENG workspace.

St. Louis-based Television Engineering Corporation (TEC) uses the stretch version of the V10-powered Ford E-350 van for its ENG 2012 truck. TEC mounts the mast (up to 56 feet long) behind the front seats for better weight distribution and vehicle handling. The ENG 2012 can be fitted with a 7 kW generator for plenty of on-site power.

Most truck builders can supply a range of vehicles, outfitted with whatever configuration the customer prefers. Schertz, Texas-based Shook Mobile Technology has ENG vehicles starting as small as SUVs and going up from there, including its AS-13 Dodge Sprinter van designed to accommodate a typical ENG-SNG package. The Sprinter has plenty of room for production and editing equipment, making it a good choice for a truck that can do ENG, SNG and multicamera production.

Beyond the choice of vehicle and installation of digital radios, HD ENG has some new considerations from the old analog days..

“With the delay in HD broadcasts, having reliable data connections is critical,” KSHB’s Nix said. “Taking sports or weather in the field is very difficult, as the reporter likes to see the scores or maps during the presentation for accurate confidence monitoring. Using a reverse Skype from our studio production switcher to our truck allows that signal verification, but establishing a robust data connection is our most frustrating aspect of live remotes—the larger the event, the slower the data connection becomes.”

As a truck builder, AMT works with lots of stations and gets feedback about the pitfalls of HD ENG remotes.

“The number one factor overlooked in the conversion to HD is bandwidth allocation,” Jennings said. “The migration to HD-SDI does have its infrastructure challenges— receive sites must be upgraded, bandwidth must be allocated for both microwave and, more significantly satellite, which could double costs of doing an uplink.

“Emerging technologies, such as cellular backpacks and comms-on-the-move antennas, are also not well-suited for the highbandwidth requirements of HD,” Jennings continued. “Training of truck operators [with years of analog experience] has also proven challenging in the rapid migration to new technologies.”

Stations that have not yet made the switch to HD ENG are lucky… enough stations have made the switch that there is now plenty of experience about what to look for and how to get things right. Still, the pitfalls are out there and waiting to snare you if you aren’t careful. The good news is that HD ENG feeds look great, and are an excellent complement to already-existing studio HD video.