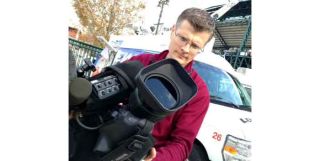 Dave Klein, chief photojournalist for WDIV-TV in Detroit checks out the Canon portable HD lens on his ENG camera.

SEATTLE—Though an ENG cameraman is identified because of the camera he’s carrying, in actuality there’s little interaction between cameraman and camera beyond turning the recording on and off, and maybe in turning on the gain switch when shooting in darker environments.

That’s in contrast to the lens, which is focused, zoomed and iris-ed in between shots, and often during a shot. No wonder a news cameraman wants not only optically superb lenses on their cameras, but also lens designs that are feature-rich.

SMOOTH AND PRECISE
“Suggestions and comments from countless ENG shooters all over the world continue to fuel the efforts of lens designers to provide the highest degree of smoothness and precision in setting the three operational controls: zoom, iris, and focus,” said Canon senior fellow Larry Thorpe.

Thorpe pointed out that because ENG cameras are not only used in collecting footage to be edited into a story, but also for live, on-the-air reporting, the lenses must be able to perform smoothly and precisely first time, every time. “Canon’s HD ENG digital lens servo systems embody the use of special Canon-developed miniature optical encoders having 16-bit precision to achieve exacting HD ENG lens performance,” he said.

Lensmakers provide specialized features that have become favorites of news shooters. An example is Fujifilm USA’s Quick Zoom on their Fujinon lenses. “The operator can push a button and the lens zooms in, or zooms out, depending on how they have it adjusted,” said Thom Calabro, director of marketing and product development for Fujifilm Optical Devices Division. “Usually it’s to zoom in so they can check focus quickly, and then they can release the button and it zooms out to the previously set framing.” That can be especially handy to check focus during a liveshot, when the control room cuts briefly back to the on-set anchors.

News photogs also want to have it all at both the wide end and telephoto end of a zoom lens. As much as they need the extra zoom focal length to capture what’s happening from behind police lines, they’re also frequently in confined spaces where they back up firmly into a corner to try to include the whole scene. “TV stations are seeking a single HD ENG lens that can provide both wide-angle and long-zoom capability,” said Thorpe.

And since they’re asking for it all, these beasts-of-burden photographers also demand that those lenses be lightweight. “As a consequence of almost four decades of evolving ENG lens-camcorder design [manufacturers have] steadily and progressively reduced the weight of both HD ENG lenses and the various HD camcorders they are used with,” said Thorpe. “Weights currently range from 4.0 to 4.5 pounds for the most popular HD ENG lenses.”


GETTING THE ARTSY SHOT
As these news cameramen are often called upon to provide artsy shots, they look for lens operational features to give them an assist. Calabro cites the Fujinon Cruise Zoom. “If they’re doing a beauty shot and want to do a really slow, steady zoom, in or out, they can start the zoom then push the ‘Cruise Zoom’ button, and the zoom will maintain that speed throughout the zoom range of the lens,” Calabro said. “Manually it’s almost impossible to do at a consistent rate all the way, end to end.” Thorpe said ENG shooters may want to pre-program settings of focal range moves, and possibly focus racking. “Canon contemporary digital servo technology—utilized by Canon ‘eDrive,’ ‘Digital Drive’ or ‘Advanced Drive,’ are features built into many of its HD ENG lenses that provide a very high degree of sophistication in empowering such operational adjustments,” he said.

Going back a dozen years or so, the front element of most ENG-style zoom lenses rotated when they were focused. Internal focusing, which allows focusing without rotating that front element, was an optional feature that added to the price of the lens. The round lens shade on a rotating front element lens was never ideal, even for the standard definition 4:3 aspect ratio. But it proved to be too much of a compromise for HD’s 16:9 aspect ratio, allowing extraneous light from above and below to strike the front element.

Internal focusing lenses allow for use of a rectangular lens shade that better blocks such extraneous light. Internal focus also allows for mounting a polarizing filter and focusing without changing the filter’s orientation.

How universal is internal focusing? “All I have to do is look through our catalog, and I don’t see any round lens hoods anymore,” said Calabro.

The 2x extender used to be a “must have” when it came to buying a lens for news. Though you give up a couple of stops when it is deployed, the extender doubles the focal length of the lens to allow the shooter to reach out to distant subjects.

“In ENG, things have changed a bit,” said Calabro. “There have been TV stations that are buying packages from camera makers, where the camera and lens are ordered together. Quite often in these lower-cost ENG units there is no extender in the lenses.” After the fact, he said they encourage the customer “to buy some of the better quality lenses with extenders for their news crews.” He noted that when the camera and lens for news use are purchased separately, the station almost always opts for a lens with an extender. Optical excellence is critically important in evaluating a lens, but news cameramen do love those features.