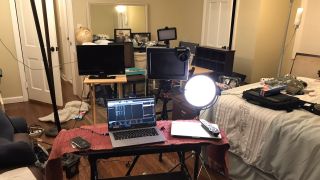 ENGLEWOOD CLIFFS, N.J.—While no one could truly have prepared for the impact that the coronavirus pandemic has had across the world and in the broadcast industry, cable business network CNBC’s efforts to prepare for a wide range of outcomes has helped it adjust as quickly as possible to the “new normal” for both at-home remote productions and its crew still working in studio.

For Steve Fastook, senior vice president of technical operations at CNBC, creating a business continuity plan for situations like a flooded building or a total power outage—i.e., anything that could cause a facility to become inoperable—helped the network deploy a  strategy to battle the spread of COVID-19 while still offering CNBC’s daily reporting.

Nearly 80% of CNBC’s staff is working remotely, according to Fastook, including 40 on-air contributors in the U.S. that have received production kits for at-home production; 10 international contributors have also received kits.

“We wanted to get as many people at home as we could, just out of abundance of caution,” said Fastook.

These kits are based around the Padcaster platform, which CNBC gave on-air talent to use for at-home broadcasts. The Padcaster features a front-end lens for higher quality and adapters for the use of lapel or shotgun mics. The Padcaster is then mounted on a desk-type or floor-type mounted tripod. LED lights were also provided for at-home use—“It would have been very difficult to do this in the days of tungsten lights, because they were so hot,” Fastook commented.

When it’s time to broadcast, anchors can connect for a livestream either through their Wi-Fi or through hard wired Ethernet, though most are doing Ethernet to avoid any potential issues with Wi-Fi outages.

“There’s a little bit of variation for the setup, because these are people’s homes and they have their own different situation,” Fastook said.

Staff are getting more comfortable with the setup and improving on the look of their new surroundings. Fastook says they are in some cases putting large TVs that play a loop of video in the background of shots.

The other 20% are employees that are still coming into the office and working in CNBC’s studios and control rooms, though that setup has also changed to try and keep everything as safe as possible.

Of the three control rooms housed in the CNBC main facility, two are currently operational and are used on a rotating schedule with cleaning occurring throughout the day. At the beginning and end of the day, an independent cleaner that is able to work specifically with technical equipment—using water-free disinfectant—sterilizes the control rooms. A show’s team—down to four or five from the normal 15 to 20—then works in one control room, keeping individuals 6-feet away from each other. Afterwards, that room is cleaned again by CNBC staff while the second control room is used by another show. This process is then repeated.

In addition, show teams have been assigned specific conference rooms or work areas that only they can work in, while editors coming in have their own individual rooms and connect through a VPN tunnel.

Fastook says the CNBC team is adjusting to their new circumstances, but many are eager to get back in the office.

Fastook doesn’t think that it is likely that CNBC will continue remote production at nearly this kind of scale when the pandemic is over, but he does see it as a next step in the network’s evolution of adding value in the form of more guests.

“All of these technologies, they may not have to be our anchors that are at home, but we’re definitely going to be able to have more and more guests,” he said. “But also, we’re really comfortable now that our business continuity plans are solid.”