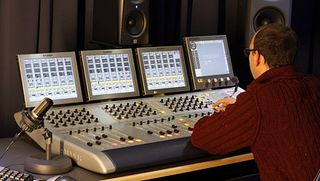 Provided by Advanced Communication Equipment (ACE), the Harman distributor in China, each station sought a more efficient and up-to-date solution. With 15 on-air rooms in the facility, Sichuan Radio purchased and installed 14 Studer OnAir 3000 and OnAir 2500 digital consoles to control their broadcasts. The master control room in the recently constructed building is fully digital and offers simulated analog signals for backup purposes, commitment program exchanges and transmission capabilities, among other tasks. The audio system controls synchronization of the clock system, internal communications and video surveillance throughout the studio.

The Wuxi Radio station renovation included an installation of five OnAir 3000s and five OnAir 2000s, all based on Studer’s SCore Router. Additionally, the master control system can be utilized to control the comprehensive surveillance and monitoring systems and silent alarm.