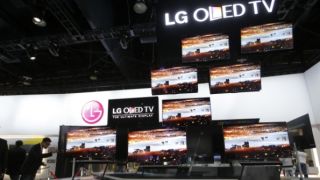 The makers of television sets were caught off guard during the transition to HDTV. Sales started out fine, but heated competition and global economic problems caused profit margins to shrink significantly. 3-D TV sales have also bombed, for a variety of reasons, leaving the industry now searching for something — anything — that will boost new home television set revenue.

That appears to be the biggest challenge this week at the 46th annual Consumer Electronics Show (CES) at the Las Vegas Convention Center, where roughly 150,000 attendees are gathered to assess what’s new — and what might sell — in consumer electronics.

So, what can a television set maker do to create excitement about new models? This year, manufacturers like Samsung, Sony, LG, Westinghouse, Toshiba and Panasonic are trying to shake the trees by building bigger television screens and quadrupling the resolution in their images to 4K in Ultra HD sets. However, many of these new models are so expensive that the manufacturers didn’t bother to reveal the sky-high prices. Panasonic and Sony both announced new 56in sets, while LG said it has begun taking orders for a $12,000 55in flat-panel OLED screen that will ship in the U.S. in March.

The real action at the show was is in the far more affordable software for “smart” TV receivers. Manufacturers are clamoring to add apps and other interactive elements to their ultrathin displays. Some created plug-in devices to add applications to existing sets, but apps are not really new and are usually an add-on to the far more profitable television display.

Even with new software, however, television sets are getting harder to sell. Many consumers are buying new televisions as often as they buy a new car, but not as often as a new computer or mobile phone.

And there’s more competition than ever to the home television set. Viewers can now access programming over smartphones, tablets and computers. This reduces the need by many people to buy a television set at all.

Television sales over the previous holiday season were down 2 percent from the previous year, Stephen Baker, an analyst for the NPD Group, told the Times. One reason, he said, is that bigger screens, ranging from 50in to 55in are taking sales from televisions in the 40in to 49in range — once an especially popular category.

Also, the average selling price of a 45in or 49in set was $615, but sets in the range of 50in to 54in actually had a lower average price, $520, Baker told the newspaper. More budget-conscious consumers chose size over other features, he added.

This year the “big thing” that manufacturers are pushing is 4K Ultra HD television. These new sets have four times as many pixels as their HD predecessors, though — like 3-D — there is little programming being distributed to watch at this high resolution. Ultra HD also costs more, far exceeding the low prices of HD sets.

Raymond Soneira, president of DisplayMate Technologies, a consulting firm that studies displays, told the Times he is not enthusiastic about Ultra HD sets. He said the higher resolution makes a difference only on screens that are at least 80in.

For smaller screens, the extra pixels would not be visible to a person with 20/20 vision viewing from a normal distance of at least 7.2ft, he said.

“It’s a bit of a marketing push,” Soneira said. “It’s really pointless for a small TV under typical viewing conditions.”

Samsung also said it would come out with 110in Ultra HD set later this year. Again no mention of price. A majority of the new Samsung sets this year are smart televisions — Internet-connected televisions that run apps for things like Netflix and Facebook.

Regardless of the CES hype, Ultra HD TVs are expected to account for only 1.4 million units sold in the United States by 2016, or about five percent of the entire market. Sales in the rest of the world are expected to be even smaller.

Forrester’s McQuivey predicted that Ultra HD TVs will join 3-D as a flop in the market.

As would be expected, consumer electronics officials are more upbeat about Ultra HD. Gary Shapiro, chief executive of the Consumer Electronics Association, told the Times that he once predicted that HD television would fail because of the lack of HD content available at the time. But it turned out that early adopters were buying the sets because they made DVDs look better.

“With Ultra HD, you’re going to see people stepping up, too, and you’ll see at the show it’s going to be a big deal,” Shapiro said.

One trick with Ultra HD TVs is to use software to upconvert the number of pixels to make them look better. However, critics doubted upconversion would make images look better on Ultra HD sets.

The big missing element at CES is Apple, which does not attend the show but has teased the market about a possible Apple TV — one that would redefine the market.

He told the Times that he imagined a 32in screen that can be controlled with touch and voice commands, hung on the wall of a room where a family would get together to talk or eat. With such a set, he said, Apple could push software developers to make apps that serve as the hub of family life, to supplement the built-in shared calendars, photos and video chats with Grandma.

“Apple needs to create a new experience for the television, not a new dimension of hardware,” McQuivey said. “That’s part of what has to change in the long run.”