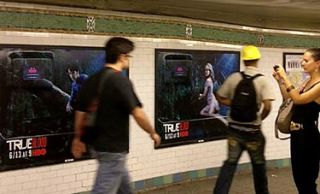 HD has gone underground, but in a good way. In what could be a telling moment for both the medium of HD and the future of outdoor advertising, CBS Outdoor on Monday (June 14) launched the first HD "video poster" in America.

To see it, you've got to go underground in the Times Square subway station in NYC.

The "Video Two-Sheet," as CBS Outdoor calls it, is a self-powered digital OOH (out of home advertising) format that was unveiled to passers-by as part of HBO's marketing campaign for its "True Blood" vampire series. As its third season gets underway, its second season recently was released on Blu-ray and DVD.

Subway riders enroute to and from the station platform are catching brief previews of the new season within the ads — thanks to thin 10-inch LCD screens (with audio) embedded in seemingly traditional "two-sheet" sized posters. Thus, the ads are mixing print, video and audio media together to convey the message.

The Video Two-Sheets are the result of a collaboration between firms Engagement Media and Standout Graphics, as well as CBS Outdoor.