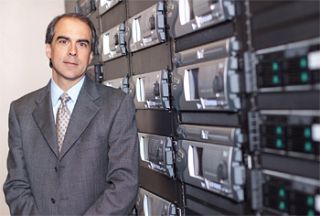 NEW YORK
Unlike the rest of its video production system, CBS News' video archives are living in the 20th century. The production department's digital video files are stored on LTO-3 data tapes in a robotically-accessed library. But the archives are still stored on XDCAM disks, videotape and even film—and fielded by hand on shelves. Meanwhile, the information on the archives' contents is only available through a text-based database. As a result, producers and editors seeking archival material have to go the archive's shelves, physically remove the media they need, and then search through them visually to find the clips they need.

Frank Governale, Vice President of News Technology and Operations for CBS News. Photo David X Prutting (c) 2010 However, CBS News' archives are about to catch up to the rest of the network's cutting-edge infrastructure. The reason: CBS News is installing Avid's new Interplay Media Asset Manager (Interplay MAM) to manage its video archives. Instead of a text-based system, Interplay MAM will provide producers and editors with low-resolution proxy videos of the footage stored in the archives. Using this proxy video database, they will be able to quickly identify the actual footage they want before an SL8500 StorageTek robot will transfer the archival material back into the production system.

CBS News is quite familiar with the Avid Interplay platform. "CBS was one of the early adopters when we introduced Avid Interplay Production and Avid Unity ISIS systems," says David Frasco, Avid's Director of Network Accounts. "There is a complete Interplay end-to-end workflow in place at CBS News right now. They use Interplay and ISIS to ingest all of their satellite and remote video feeds, and then edit and playout to the control room with NewsCutter and AirSpeed."

Until recently, Avid did not have a media asset management product to round out the Interplay family. But this changed when the company purchased Blue Order in March 2010: Avid wasted no time revamping Blue Order's successful Media Archive asset management system into the Interplay MAM module. It then unveiled the expanded Interplay product family as the foundation of the Avid Integrated Media Enterprise framework at the 2010 NAB Show. With the appearance of Interplay MAM, the missing link in the Interplay chain was complete—and CBS News seized upon it to resolve the network's archiving issues.

"Interplay Media Asset Manager allows CBS News to completely integrate its existing video production system with its archiving system," says Frank Rauch, Avid's vice president of Media Asset Management Sales. "Once a story has finished its broadcast cycle, it can be archived in high resolution on data tape and low resolution video proxy on server. The librarians can then add to the existing metadata set on the Interplay MAM database. Retrieval will thus be easy and efficient."

"CBS News has an estimated 85,000 square feet of video and film in our archives," says Governale. "Some of it will never be dubbed onto digital tape, simply because there is no demand for its content. But much will be dubbed or already has been; for instance, we copied our Quad tapes onto digital because the 2-inch tape stock was degrading." As for 3/4-inch UMatic tapes? On this score, CBS News got lucky: The Library of Congress will be handling the dubs for them.

The network's goal is to digitize the most valuable/saleable elements of its analog assets, plus add new digital content seamlessly to the archives without consuming more space. To this end, CBS News is already using LTO-3 tape cassette storage, with each cassette able to store 400GB of data. However, Governale's goal is to scale up to LTO-5 tape cassettes, which can store up to 1.6TB of uncompressed data per cassette. (LTO-5 offers a 2:1 compression rate, meaning that an effective 3.2TB capacity can theoretically be utilized.)

In addition to Avid Interplay MAM, CBS will be installing additional NetApps servers to handle the low-res video proxies and cache any high resolution video files reacquired from the archives. The metadata will be stored and accessed on an SQL database; the same standard CBS News is operating on now. "We will be using the Windows Server operating system on our hardware, which is also already in use here," Governale says. "There's no reason to change, since what we are doing is integrating Interplay MAM to our existing production system."

With any luck, the move to Interplay MAM and the digitization of valuable analog tapes will allow CBS News to stay within its current 85,000 square foot archival footprint. "We really don't want to use up any more space," Governale says. "In fact, it is our hope that moving to LTO-5 tapes—and eventually higher capacity LTO-6—plus removing old analog tape stock will actually free up some floor space."

CAPITALIZING ON AN INVALUABLE RESOURCE

It is reasonable to say that some of the greatest moments in recent U.S. history have been symbolically defined by CBS News clips, such as Walter Cronkite's grim announcement of President Kennedy's assassination on November 22, 1963. At a time when the Web is proving to be a powerful marketplace for video sales—for instance, stock footage sales moved from tape to Web delivery years ago—it only makes sense for CBS News to make its marketable clips easily and quickly available.

"Today's production media is tomorrow's valuable archive asset," quips Frasco. "But you can only capitalize on the value of your archives if you can send them out in a cost-effective, non-physical manner."

That's a far cry from the current shelf-and-box archive system at CBS News, Governale says. "Add handling time, material costs and shipping, and there is a lot of money spent on items that will not be necessary once our archives are based on the Interplay MAM system."

At press time, CBS News and Avid were laying out plans to integrate Interplay MAM into CBS News' video system. Once it is in place—likely by the end of this year—the network's archives will finally be up to the same cutting-edge standards as the rest of its production chain—and able to deliver archival footage to editors and customers alike quickly and inexpensively.