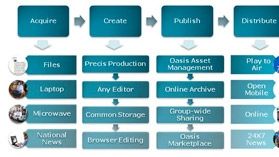 Precis was designed as an open solution so it can be used with software and hardware combinations that work best at each station. It is in use among such station groups as Gannett Broadcasting, Journal Broadcast Group and Raycom Media.

The Precis system provides stations with a workflow solution that allows ingest of content from the field without transcoding and enables a story package to be prepped once whether the destination is a televised newscast, the Web or another platform.