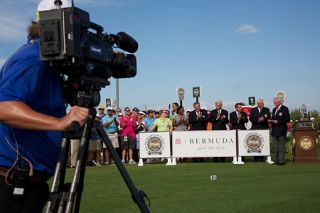 The PGA Grand Slam of Golf is a 36-hole tournament that matches the current winners of golf’s four major championships--The Masters, U.S. Open, British Open and PGA Championship. This season-ending event was televised Oct,18 and 19 on TNT.

The Calrec Artemis Beam digital audio console with Bluefin 2 signal processing was added to the Flypack for the Bermuda event to reduce pack weight. So was the Sony MVS-7000X 4 M/E multiformat digital 3G production switcher, a custom monitor wall with up to 224 virtual displays using processors and a router from Evertz, and a mix of Sony and Panasonic multiformat HD VTRs.

The announce booth was based around a Calrec Hydra2 32x32 analog I/O box interconnected to the main console with single mode fiber. All microphone, talkback, IFB and four-wire signals were distributed to the booth via the Calrec Hydra2 I/O.