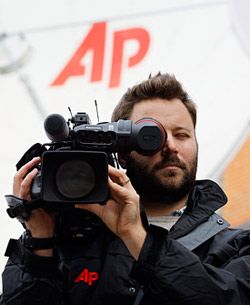 Associated Press Television News announced this week that it is undertaking a “substantial” multi-million dollar investment to upgrade its newsgathering infrastructure improve its digital workflow and with the goal of introducing HD to its operations by 2012. The project marks its single biggest investment the London-based company has made since it acquired a competitor, Worldwide Television News, in 1998.

APTN says its plan will ensure that AP’s video operations are fully digital from end to end, and that video can slot easily into any workflow of broadcasters and digital platforms around the globe.

The video business arm of The Associated Press currently supplies live news video and edited clips of entertainment, sport and lifestyle coverage to more than 1,000 national and international broadcasters and major portals worldwide via an international satellite and fiber network. It currently has bureaus in more than 80 countries.

The plan to introduce HD will begin in 2011, starting with entertainment coverage and moving on to sports and live news coverage by 2012.

Daisy Veerasingham, senior vice-president of business development and partner relations, said: “Traditionally, customers have subscribed to our service for competitive coverage from every corner of the globe. But as well as having strong content, it is vital that in the digital age we give our customers choices about how they receive our content.”

“This investment will give our customers a wide range of options about the technology they use to receive video – both in the traditional broadcast market and on digital platforms. We believe 2011 is the tipping point when the majority of the international TV news market will want pictures in high definition.”

“AP’s video journalists gather the most compelling images from the most fascinating corners of the globe every day. By deepening our investment and transitioning to digital, we reaffirm our commitment to bringing each day’s most vital videos to audiences worldwide in easy-to-use formats at the fastest possible speeds,” said Kathleen Carroll, AP executive news editor.

The investment will see the company deploy state-of-the-art cameras around the world, renew its core production infrastructure and provide new eBusiness delivery platforms for digital customers.