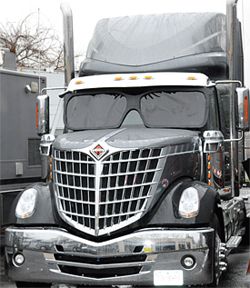 NEW YORK
When it comes to their new 3DTV production trailer, New York-based All Mobile Video has gone all out. "Even the truck cab has 3D glasses," quips AMV President Eric Duke, and he's right: It does!

AMV outfitted the cab of its first 3DTV with a matching set of glasses. Humor aside, AMV's first 3D trailer ("AMV 3D") is significant because it is a "3DTV First" production facility; in other words, this 53-foot trailer has been built expressly to support 3DTV production, with 2D HDTV being a fully-supported second priority. As a result, 3DTV broadcast clients who use AMV 3D will not have to tolerate workarounds, improvisations and cobbled-together 3D facilities. This truck was designed to do 3DTV from the get-go.

"We started working in 3DTV field production last summer," Duke said. "We quickly saw that it was an interesting technology with lots of potential, but one that needed to have proper facilities to make it work. In particular, the time was ripe for a true 3DTV production trailer; one designed to contain all the necessary equipment and optimized for the 3DTV workflow. That's what drove us when we laid out and equipped our first 3D trailer."

On the outside, AMV 3D looks like any shiny, high-end TV production unit—except for the oversized 3D glasses on the front windshield. (Apparently they are functional, since anyone looking through them does see the road in three dimensions.) On the inside, it's a different story.

The unit—which has an Expando wall running down the rear two-thirds of its left wall (facing the front)—has room for up to 25 operators in its three rooms. The room on the furthest left houses 7.1 audio (four people); the center room is home to the main 3DTV production/switcher bay (eight people), and the third room on the right holds up to thirteen techs. This space is used for engineering with space for extra tape machines and a backup stereographer, or support for simultaneous 2D HDTV production.

The second standout are the prominent roles of the 3D stereographer and convergence operators; the experts who manage the twin images that comprise AMV 3D's 3ality 3DTV video streams. "In most rigs today, the stereographer is off in another room; typically because the trucks they are in were never designed to do 3DTV," Duke says. "But since this trailer puts 3DTV first, we have designed it so that the stereographer is in the main production/switching area next to the director. This allows the director to have an active say in adjusting the depth of field [the degree of '3D-ness'] as a production is underway. And yes, everyone is wearing 3D glasses in this area."

AMV 3D's third difference is its 3Gbps (3G) network infrastructure. "Since we are putting '3D First,' it made no sense to put a 1.5 Gbps backbone in this trailer and then have to double up all the channels," said Duke. "So this trailer is 3G all the way through."

AMV 3D made its debut at the 2010 NAB Show, showcased at the Sony booth, where delegates were wowed by its top-end features, high-tech interior and oversized outdoor 3D glasses.

"We got lots of very positive feedback at the show," Duke said. "People were very inquisitive about 3DTV, now that they could see the equipment with their own eyes. They wanted to know all about working in this new medium."

AMV 3D's razzle-dazzle belies the sophistication of its technology—and the challenges that technology presents. Specifically, this is a cutting-edge 3D truck, designed for a medium that is still unfamiliar to most broadcasters. This newness is a challenge in itself, but add the fact that AMV 3D is designed to handle simultaneous 3D and 2D field productions, and one has to wonder: Just how demanding is this rig to work with?

"We are well aware that 3D and 2D are different media," Duke said. "For instance, the type of fast-cutting that works in 2D doesn't in 3D, because 3D is an immersive experience. You want to stay with shots longer to look around and be part of what's happening. This means that you can't shoot a 3D production using 2D switching techniques, because the experience will be too jarring for 3D viewers. But nor do you just want to take one video channel from a 3D production and use it for 2D, because the switching will seem too slow for HDTV viewers."

It is precisely for this reason that AMV 3D has been designed to support simultaneous 3D/2D productions, i.e. "side by side." "You can configure this trailer such that you can do the two styles side by side, so that your feeds suit both your 3D and 2D viewers," Duke said. "As a result, our first 3D trailer is no technological prima donna. She is very easy to work with in 3D and 2D."

At press time, AMV 3D had returned to AMV for some final tweaking after the NAB Show. If all goes to plan, she will be on the road this summer; shooting 3D and 2D for whoever hires her.