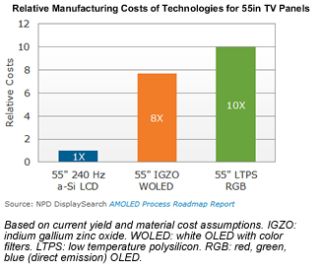 The market for active-matrix organic light-emitting diode (AMOLED) will grow nearly tenfold from 2.3 million square meters in 2012 to more than 22 million in 2016, according to a new forecast from NPD DisplaySearch.

Currently, the lion’s share of AMOLED capacity is dedicated to small/medium production for smart phones, said a new report from the display market authority.

However, in the future TV production will likely drive AMOLED fabs. However, NPD DisplaySearch cautions there are many unknowns the extent and speed at which this will happen because AMOLED technology has not yet been proven in large-size TVs.

According to the “NPD DisplaySearch AMOLED Process Roadmap Report,” the manufacturing cost of a 55in oxide TFT-based AMOLED using white OLED with color filters is eight times that of a high-end 55in TFT LCD display of equal size. The cost multiplier of a 55in AMOLED module using red, green, and blue OLED is 10. These higher costs are mainly the result of low yields and high materials costs.

“While cost reduction in LCDs has slowed, large-panel AMOLED cost reduction is in its infancy,” said Jae-Hak Choi, senior analyst, FPD Manufacturing for NPD DisplaySearch. “In the long term, new and improved processes, printing technology, and higher performance materials will reduce AMOLED costs to levels equal to or lower than LCD.

Greater maturity in the manufacturing process for smaller sizes has driven the cost premium for a 4in AMOLED to less than 1.3 times that of a similar-sized LCD. Samsung Display has been highly successful in its small/medium AMOLED production because it has been able to raise yields to near-LCD levels, NPD DisplaySearch said. This implies the manufacturers can potentially lower large-size AMOLED TV costs to be competitive with LCD TVs in the future.

However, before scaling up to large sizes, there needs to be advancements in several aspects of AMOLED manufacturing. Those include the active matrix backplane, organic material deposition and encapsulation, NPD DisplaySearch said.