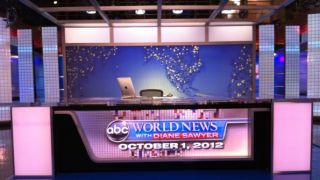 The highly stylized on-air graphic packages were all designed by the network’s in-house graphics department, including a new open, strategic bumpers and lower third crawls.

Michael Corn, executive producer of "World News," oversaw the program's "modern, clean look," which will continue to broadcast from the network's 66th Street studio (also home to "Nightline" and "20/20”). Other insiders have said it is the most economical redesign of that space that the network has done to date.

The new anchor desk, which is an expansion of the existing set, previously could only support one anchor and up to two correspondents. It can now accommodate two anchors and four correspondents for special events, including the upcoming elections.

There’s a new widescreen floor-to-ceiling flat-panel monitor wall backdrop, sleek side columns with insert monitors, the anchor desk has been lowered from a few feet to about 6in high to enable the on-air talent to move around the set, and the working newsroom in the background is more visible than ever before. In addition, correspondents — who formerly sat up to 6ft away from Sawyer — will now sit much closer, establishing a more conversational environment.

The show last redesigned its on-air look in 2009, when anchor Diane Sawyer replaced Charlie Gibson. The show hasn't had a new theme song since 2000, when Peter Jennings commandeered the chair.

A look at the show's new opening grapchis is available here.