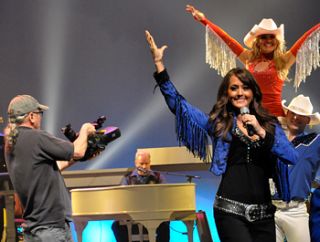 AUSTIN, TEXAS
Even people who have spent much of their lives in the picturesque Smoky Mountains will tell you they've never seen their surroundings quite like this before. While 2D HD probably would have done justice to the many natural and man-made attractions of Gatlinburg, Sevierville and Pigeon Forge in Tennessee, capturing it in stereoscopic 3D brings an added dimension to the subject matter in more ways than one.

Penguins stare back at 3D producer Randall Dark with amusement at Ripley’s Aquarium of the Smokies in Gatlinburg, Tenn. Now in post-production after a spring shooting schedule, the idea and principle photography for the documentary "3 Cities in 3D" throughout the Smoky Mountain region was conceived and shot by veteran HD cinematographer Randall Dark. Other principals for the marketing tool include locally based Cinemarr Entertainment of Sevierville, and CineForm, a software integrator and post house based in Solana Beach, Calif.

The 3D tourism production is earmarked for an initial airing on Wealth TV, a six-year old network based in San Diego that's been struggling to grow its cable carriage. Although Dark set up one of the nation's first HD production houses and continues to run his own shop—Randall Dark Productions in Austin, Texas—this was his first major 3D project. He said his biggest challenge was simply defining what the look and feel of the documentary should be.

"A knee-jerk reaction would have been to punch through that 'fourth wall' and do the familiar one-trick pony effect," Dark said. "But 3D needs to be more than objects floating in front of your television. The animation studios have proven for years—and recently ['Avatar'] director James Cameron did, too—that a willing suspension of disbelief can happen in 3D and your audience can have a cathartic response to the storytelling. So I want the effect to be a pay-off, not just a trick."

Dark said he's always been driven to create video content using cutting-edge technology—which explained his early passion for the then-emerging medium of HD several decades ago. But 3D technology for its part, is hardly new. "Since 3D has been around for many years, I thought there was nothing new I could bring to the party. The latest pioneers of 3D were already creating very cool content and had established successful workflows. But then I saw Panasonic's version of [the computer-generated Pixar movie] 'Wall-e.' The idea that a 3D camera could be really portable and truly user-friendly greatly appealed to me."

Randall P. Dark shooting Country Tonite for 3 Cities in 3D with the Panasonic AG-3DA1. Dark had worked with Shane Marr, the head of Cinemarr Entertainment, on a PSA featuring Dolly Parton (whose Dollywood theme park is located in Pigeon Forge). So Dark successfully pitched the 3D documentary to Wealth TV. Marr said while seeking out a dual-lens 3D HD camera suitable for occasionally arduous field work, they selected the Panasonic AG-3DA1.

"This camera made post [production] much easier because there's no need to sync anything up," Marr said. "Image files aligned perfectly, once the footage was loaded into the computer. Marr said in post-production, he's using Cineform's Neo3D to mux left- and right-eye views in order to make any convergence tweaks necessary to highlight something in particular. The CineForm software also is being used for color correction. "Once that's complete, we import the files into [the editing platform] to start the cut."

Yet neither Marr nor Dark is exactly tossing HD aside for the challenges and artistic allure of 3D. "The AG-3DA1 is like shooting two projects at once," Marr said. "You're shooting both 3D and two '2D HD' views simultaneously—that is to say, the left- and right-eye views. It reminds me of something an old instructor of mine use to say. 'Shoot as much as you can. You can always take away, but you can't add.' So I say shoot in 3D and even if you only use the 2D version, you'll have the option of going back to the 3D version later." (Using just the left-eye version of a stereoscopic 3D shoot usually produces acceptable HD 2D content.)

First introduced by Panasonic last April at NAB, the AG-3DA1 will become available by late August. Panasonic's Jan Crittenden Livingston, the new camera's product manager, envisions the compact unit as "broader-basing" the world of 3D to far more users. "We reduced the cost of entry with the price points, along with the technical wherewithal that's normally required for dealing with 3D stereography," she said. "For 3D right now, we're really helping expand accessibility to television projects, and that's saying something."

Randall Dark shooting the Titanic in 3D the easy way Still, Crittenden cautions, there are some 3D-centric idiosyncrasies that have to be considered when shooting. "This little [6.5 pound] camera only burdens the stereographer with two things… one being the parallax aberrations or anomalies that you need to look out for, such as objects getting too close to the camera and creating visual distractions," she said. "So operators have to take steps to avoid it. The next thing to pay close attention to are possible framing problems, where, for example, some object enters the frame and at first can be seen by only one eye, left or right. This can cause a very disturbing effect on the part of the audience—depending on how large that item is, it can feel like a linebacker just hit you or like a nervous twitch in your brain—either way the effect is pretty uncomfortable,” Crittenden said.

Although not all 3D projects are shot and post-produced in the same way—Crittenden said 23 different cinema projector configurations were necessitated by screening "Avatar" in 3D globally—eventual 3D content typically is edited in 2D (HD) as independent Left Eye and Right Eye. Then a final "conform" in 3D is created at the end of post. But since the "3 Cities in 3D" project used CineForm's Neo3D software in post-production, content can be viewed in 3D during the editing process.

According to CineForm CEO David Taylor, "This edit technique allows the elimination of 3D 'conform' entirely and the ability to handle prints directly from the editing timeline to electronic 3D distribution or projection files." "3 Cities in 3D" is now in the midst of being editing in real time with full frame-rate playback to external 3D monitors. Taylor said his software firm's key Neo3D application (dubbed "First Light") can work in tandem with Adobe Premiere Pro, Apple Final Cut Pro, and Avid Media Composer.

"We're within a day's drive of two-thirds of the U.S. population and we're very much a tourist destination," said Lori McMahan Moore, executive director of the Smoky Mountain Tourist Development Council. "So from our perspective, it's completely marketing. So far I've seen maybe a minute of the 3D footage and I was absolutely blown away. So much of 3D is simply depth perception—not objects coming out at you off the screen. It was truly amazing," Moore said.