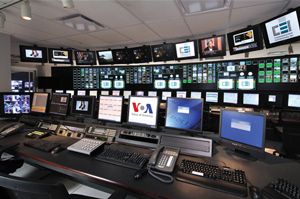 HAMILTON, N.J.:—Demand for systems integration is spilling out beyond broadcast networks and stations to include corporations, government agencies, universities and others who now rival broadcasters in their use of sophisticated, high-end media gear to produce and distribute video content.

Webcasting, videoconference rooms, and corporate television are among the many applications now reliant upon broadcast-quality video installations for high-impact communications. At the same time, broadcast facilities continue to deal with new-age challenges, such as distributing content across multiple platforms and striving for greater efficiency along file-based workflows.

For Voice of America, CEI transformed an empty room in VOA’s Washington, D.C. facility into a new digital master control center. This new file-based workflow enables VOA to broadcast news and cultural programming in multiple languages to a global audience of over 123 million via the Internet, radio, television, and social media.

“With the ever-expanding universe of origination channels that are not necessarily run by traditional broadcasters, common broadcasting challenges, such as digital asset management, are now impacting a broader base of customers,” said Lore Potoker, CEI’s marketing manager. “Corporations and other non-broadcast entities are turning in greater numbers to systems integrators with broadcast experience to ensure that their [largely video over IP] networks cost-effectively meet their business objectives.”

…AND BROADENING BROADCAST
According to Mark Siegel, president of ABS in SeaTac, Wash., station groups that used to comprise the lion’s share of the SI business now tend to keep their projects in-house, relying instead upon their own engineering staff to handle them. “They increasingly view systems integration as an additional expense when in reality there are many ways our services can be cost justified,” Siegel said. “Experienced systems integrators can bring in a fresh perspective on how to solve their technical challenges.”

Dave Van Hoy, president of Advanced Systems Group, a systems integration firm in Emeryville, Calif., agrees with Siegel that the traditional broadcast business is no longer a growing market for them. “We’re seeing an increase in demand for our services by corporate production groups, especially Silicon Valley giants, looking to communicate through new channels.”

Many SI projects are intended to reduce the operational cost and complexity associated with master control or network operations center. This is the case with a new SI project called JMCO (Joint Master Control Operations)-Centralcast, the first of its kind regional centralcasting hub.

“We’re still in the design, procurement, and pre-building phase,” said Marc Bressack, executive vice president of Azzurro Systems Integration. “We expect to be going onto the site in July and the system will be going to air by a November 1st target date.”

JMCO-Centralcast will centralize the broadcasting of 35 feeds, including the HD, SD, and other feeds generated by the nine PBS stations. Bressack adds that “there is a possibility it will be rolled out to other PBS stations in other regions in the future.”

Like any industry, broadcasters are being forced to become more efficient in their operations, according to Joseph Policastro, senior director with Broadcast Integration Services (BIS) in Union City, N.J.

“Enabling clients to do more with less continues to be a driving force in the SI business,” Policastro said. “Broadcasters want to expand their channel capacity and deliver to multiple platforms while containing costs.” On two major projects for Viacom/MTV Networks, BIS transformed their existing facilities to a higher level of efficiency so multichannel and production capacities could expand.

“Technology is advancing so rapidly that [broadcasters increasingly] need to have a systems integrator helping them work through the workflow issues,” Policastro said. “We can provide the technical expertise to evaluate the options that are before them and help determine the right technology to fit their needs.”