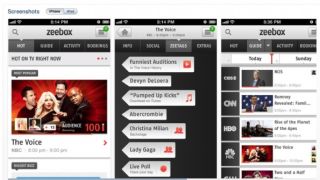 Zeebox has launched its mobile television service in the United States with major partnerships that include Comcast Cable, NBCUniversal, HBO and Cinemax.

The cloud-based app recognizes the context of what its users are watching and enhances the viewing experience with relevant content from across the web, TV programmers, social networks and advertisers. Viewers can engage with television personalities directly through Zeebox and buy the products they see on TV. It automatically displays in-depth information about the programs as viewers are watching.

“As consumers continue to flock to social media and the web to experience a program beyond what is on the screen, Zeebox gives content owners and programmers a direct line of communication, feedback and engagement that has never before been possible,” said Ernesto Schmitt, CEO and co-founder.

As strategic launch partners, Comcast Cable and NBCUniversal are backing Zeebox with investments and promotional support. NBCU will add tags to provide enhanced content through the Zeebox app on 307 shows. This includes 165 shows across 14 networks nationally and 142 shows across 11 owned NBC stations and three regional sports networks, according to reports.

Zeebox’s OpenBox API allows content owners to enhance their shows and channels on the app in a matter of hours, distributing exclusive content to consumers, connecting directly with fans through live interactions and social engagement, and monetizing the second screen alongside TV commercials through synchronized, targeted, relevant advertising and affiliate links.

Zeebox said its consumer research confirmed that up to 70 percent of U.S. television viewers are interested in the feature set the Zeebox service provides. In the past year, the market for second-screen TV apps has been evolving rapidly but remains highly fragmented.

Consumers today, said Zeebox, are using different apps and web services for discovery, social engagement and interactivity. However, it said Zeebox brings all these features together in a single app that drives increased viewership of programming by making the live TV experience more compelling.

The features include a seven-day TV program guide across all major U.S. TV channels, enabling the configuration of customized channel line-ups and booking of future TV show reminders; integration with Facebook and Twitter to enable social discovery of TV content, and engagement with friends and celebrities across live TV; and in-depth information about shows, talent, topics and products mentioned on TV — synchronized second by second with the live show.

Also included are ecommerce links to relevant digital and physical products related to shows and the content of shows, with direct links to VOD content to come in the near future.

The service is optimized for the new iPhone 5, 4in Retina display and on iOS 6, including Smart App downloads within Zeebox and Facebook single sign on. The app is available for free from the App Store. A Web version is also available.