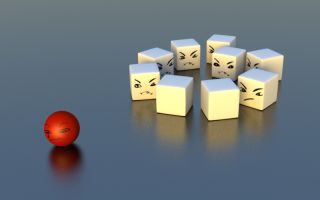 TRY TRY, AGAIN: Failure is an age-old institution. Without it, physicists may not have isolated the Higgs Boson, which promises to be the weight-loss secret of the millennium.

Entrepreneurship—esteemed now as once only philanthropy was—is a sea of failure. The actual failure rate is up for debate, but Shikhar Ghosh of Harvard Business School says around 90 percent of startups fall short of projections. They grow disproportionately; overestimate a niche market, underestimate the competition, run out of money—they self-delude. Believing real strong and tapping ones heels together does not a reality make, despite what the current army of financial self-help gurus preach. Nothing takes the place of solid planning, market research, elbow grease and flexibility.

That last one is a big one. The founder of TV Technology once told me that his original business plan tanked, so he switched gears and published a magazine. He’s now racing cars somewhere in the desert. I remember sitting with the producing partners of Oxygen years ago, when the network was just launching. It was going to be the anti-Lifetime, with a two-hour block of live, free-form programming in prime time. When I asked how free-form programming was supposed to work, I was told that I just didn’t “get it.”

I may not have isolated Higgs Boson, but I watched TV. It seemed to me that condescending to a potential customer should be a clue that one’s business strategy is dangerously self-absorbed. Oxygen later regrouped and programmed scripted series in prime time—because that’s what the audience wanted. I did not become a member. First of all, it’s condescending for someone to assume my programming preference because I am female. I was just as fascinated by color footage of Hitler as the next guy. And second, the underlying theme of the network was exclusionary, just as I was told. Either you get it, or you don’t, and if not, you’re not cool.

Exclusionism is lazy marketing, but it remains popular because it can work—however briefly. Marketers may believe real strong they’ve secured consumer buy-in with exclusionism, but more likely it’s a temporary indulgence in yet another ephemeral trend. Thirty years ago, nearly every woman in the country had a pair of black canvas flats imported from China. No one bought a second pair. When it comes to goods, trends and services, people get over things quickly when they don’t get consistent and quantifiable satisfaction for their money. Those shoes were comfortable for about 50 feet of perambulation.

However, the business maneuver itself was a success because those shoes were a one-off import, and not the basis of 1,000 brick-and-mortar stores. Whoever shipped the gross tonnage of that footwear to the United States evidently wore them first. And this, to me, represents a key to success or failure on any level. It’s a good idea to need, want, use or otherwise enjoy whatever you intend to purvey, and to find out as thoroughly as possible how many folks feel likewise.

Startups and established companies alike, to their detriment, often overlook market research. People may not always know exactly what they want, but they can sure spot something they don’t want. Several years ago, music lovers made it clear that they didn’t want to pay $20 for 15 songs encased in explosives-grade plastic. Old audiophiles lost their album-cover art, and nascent ones wrote file-sharing software.

Big music companies blame the Internet for imploding revenues, but the ’Net didn’t incite the mp3 revolution. Those companies abused customers, doling out only certain types of carefully packaged artists. (If you weren’t on board, you didn’t get it.) People spend more money on music now then ever before because more music is available than ever before. The difference now is that it’s going to more than just five big record companies.

The decentralization of the music industry is an object lesson for content companies in general. People have noticed their local newspapers are nothing but wire stories. They do notice all of the advertiser fluff pieces dressed up as news, and they will notice the same newscast on different stations. What appears to be good for the bottom line in the short term may kill a business over time by alienating audience members, who should be treated like customers, or at least like people rather than just incremental revenue units. And there is evidence that they will pay for quality content.

Content distributors are at just as much at risk. New receiving platforms are proliferating at an unprecedented rate. TV Everywhere is a misnomer. It should be, “TV as we want you to have it through our proprietary interface.” It’s only a matter of time before the anarchy of file-sharing reaches the level of hardware. Locking people in is a bad idea. Ask the music industry. It didn’t fail, per se.

It failed to respect its customers.


Post script… when I was contemplating the notion of failure, particularly in entrepreneurship, I considered the way we’re able to latch onto an idea regardless of its obvious absurdity. Take U.S. Patent No. 5,983411, the toilet-tank aquarium, “a new toilet tank assembly for housing aquatic creatures.” Then there’s No. 4,195,707 is for a “communications device” consisting of two cans and a string—sensibly granted on April 1, 1980. How about an electrified tablecloth or a Christmas stocking in the shape of a paw? But for every 10,000 or so tooth pillows and banana protective devices, there shines through a keeper—like No. 388,664: The spork. Bottom line; success can be the process of eliminating failures. As long as you have the time and the pocketbook! ~ D.McA.