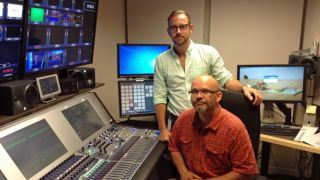 Bell Media, the owner of 30 television stations in Canada, including CTV, the country’s premiere network, recently purchased a 48-fader Lawo mc²56 production console and a 16-fader remote bay for the company’s CTV-Montreal station. This console will be integrated with the five other mc²56 consoles that the company currently owns and houses in its main production facility via Lawo’s Nova 73HD router.

Over a two-year period, the RDS (Le Réseau des Sports) facility that is home to the consoles went through a major upgrade, according to Martin Côté, Manager of Engineering Projects for Bell Media at CTV Montreal and RDS. “We introduced five new control rooms, all equipped with Lawo mc²56 consoles. All of the surfaces were linked together using the Nova 73HD router core. The idea was to be able to use any of the studios, feeds, cameras, etc. with any control room and Lawo surface.”

More information on Lawo can be found at the company website, www.lawo.de.