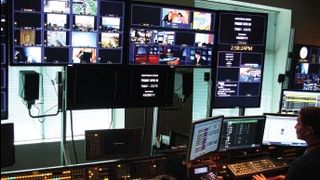 Like many television stations, KOMO in Seattle had long been broadcasting using a fully HD-capable master control room. Its production facilities, used many times daily for its newscasts, were capable of 16:9 production, but not HD. That needed to change, said KOMO engineer John Reynolds.

That, combined with significant stability issues with audio and video equipment, necessitated an upgrade. The station chose an ELC newsroom automation system from Sony to streamline the news production workflow and a Sony MVS-7000X production switcher to handle video control. That left one key need unfilled: audio.

The existing audio console had long been considered rather complicated to operate; KOMO needed a stable, easy-to-use alternative. Several consoles were considered, but in the end, the need for more control flexibility and more mix-minuses led to the station's choice of the Wheatstone Dimension One, the latest network-based television audio console from that manufacturer.

Design work on the new control room began in April 2011. Construction began shortly thereafter with the assistance of Advanced Broadcast Solutions, an integrator that handled installation, wire management and documentation. The Sony ELC news production automation system's audio facilities are capable of controlling 48 logical faders, and the Dimension One was ordered to provide that exact number, an important consideration.

The upgraded news production control room is now in full-scale operation. Although the facility is occasionally used for commercial production, such sessions are difficult to schedule because of the need to produce newscasts throughout the day. The project's ultimate goal — to produce HD newscasts, important in today's competitive television market — seems to have been well satisfied.