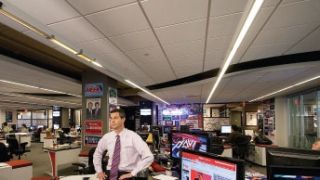 The new floor also offers an enhanced work environment for the staffs that migrated there. Previously, the shows, coverage beats, assignment desk and executives had been segregated on separate floors. Even the desk, which had occupied a single space before, was handicapped by poor acoustics and intruding structural columns.

With the opening of the new floor, the most dramatic innovation introduced was that the assignment desk, the beats, the situation room, “John King USA,” the political unit and bureau management all share a single common floor. In a significant environmental change, offices were clustered around the building core, giving window views and natural light to the open workspace areas.

In bringing all the groups together, the designers focused on improving communication, even eye-to-eye contact. At the assignment desk, workstations, custom-made by dTank, are arranged in two large semicircles with a minimum of obstructions between desks, and attention has been paid to improved acoustics. Adjacent to the assignment desk is a robotic camera with low-profile LED lighting that allows for quick live reports with a minimum of interruption to the working desk. The desk is able to communicate with CNN headquarters in Atlanta, as well as studios and control rooms through RTS intercom panels.

On the opposite side of the floor, overlooking the network's political unit, is another stand-up position used for hourly updates on campaign developments. The 8th floor of the CNN Washington Bureau has flair, form and, most importantly, functionality.