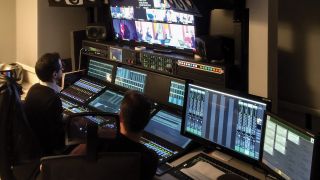 Many of the new developments for the System T platform are designed for advanced AoIP integrations or new immersive/Next Generation Audio (NGO) workflows. SSL will show how the System T architecture provides processing for multiple audio formats for immersive and three-dimensional audio. There is also a new partnership with Sennheiser AMBEO that adds on-board conversion support for the AMBEO VR mic, with a 360 transcoder. The platform also supports multiple formats, including ATSC 3.0, Dolby Atmos and MPEG-H.

Another technology that SSL plans to highlight is its Dante-based IP Network I/O portfolio, including the HC Bridge SRC. This I/O device provides 256 bi-directional channels of sample rate conversion for AoIP networks and also facilities connecting audio between devices running at different sample rates or in different clock domains on Dante, AES67 or ST 2110-30 networks. The network connections can be physically or virtually separate networks.

SSL also will feature the latest update for its range of console control surfaces. This covers the configurable S500 and S500m surface, as well as pre-configured surface options in the S300. The consoles run a Dante AoIP backbone and are compliant with AES67/2110 protocols. With System T, the consoles can integrate into an existing or future AoIP infrastructure.