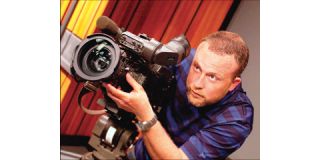 SOUTH BEND, IND.: I shoot a lot of commercials, and typically these are done in pretty confined spaces such as a doctor’s office, or a Mom and Pop pizzeria. I use a Sony XDCAM 355 with a news-style zoom lens that doesn’t go very wide. And with a camera that large, by the time I’ve set up my lights and tripod, I’m backed into a corner—sometimes only five feet or so away from the subject.

I really needed the ability to go as wide as I could to capture everything that was going on around me.

The solution to my dilemma was a Schneider Optics Century 0.8X Zoom-Thru wide-angle converter. It provides me with a 20 percent greater field of view, making the space I’m shooting in appear less crowded, and also makes it easier for me to frame the shot I want. If I didn’t use the wide angle converter, the viewer might think the business place I’m shooting is really small. Making it appear larger really helps me and my clients.

The nice thing about the 0.8X Zoom- Thru is that I can use it like a normal zoom lens—only just a bit wider.

Recently, I shot some footage at a factory where plastics are molded into various products. I found that I could get my wide shot, pan or tilt and even zoom in, and still get a tight shot without removing the converter. This made my life a lot easier.

GOING EVEN WIDER
We’ve also got a Schneider Optics Century super wide-angle adapter that allows me to go 30 percent wider. During that same factory shooting assignment, I wanted to illustrate a process in which one of the machines chops up big clumps of plastic into plastic beads prior to their being melted and poured into a mold. With this lens converter I was able to move in very close to the process and get a creative shot of the plastic beads coming out of the machine. The super-wide field of view also added a slight fish-eye look to the video.

I also help shoot promotion video for the station, and one of our favorite shots is done in the studio with the camera mounted on a dolly.

We light the set with colored lights, and using the 0.8X Zoom-Thru accessory, dolly around the talent. The viewer gets a much wider view of the studio than they would normally see during a regular newscast. That extra coverage I get with this lens converter enhances the fl are and makes everything pop and look really good.

Another great feature in connection with these two lens accessories is that they don’t take a lot of time to mount and dismount. Each converter has a mounting ring, and with just a little twist clockwise, the unit is snugged down. When it’s done its job, I just give it a counterclockwise twist and it’s ready to remove. When I need to use one of the units in the field, I just take it out of the box, lock it onto the lens and I’m good to go.

Josh Taylor is the creative director for CBS affiliate WSBT-TV. He is in charge of creating commercials, long format videos, and assisting in writing/shooting station promotion. He may be contacted atjosh@wsbt.com.

For additional information, contact Schneider Optics at 818-766-3715 or visitwww.schneideroptics.com.