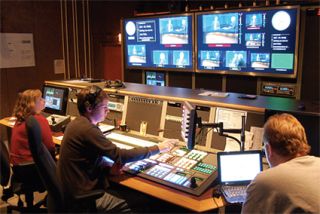 (L-R) Margaret Kivlen, producer; Jim Lepp, associate producer; and Rich Hronik, engineer operate in the Sprague Tech Center studio control room anchored by the new Ross Video production switcher.
ANNANDALE, VA.—Our television operation is part of the Fairfax County Public School System and our productions are oriented towards the education of students, staff and community. We produce a mix of high quality live and recorded productions, some which are transmitted to schools across North America via satellite, with a potential audience exceeding 15 million.

We also appear on three cable channels, all carried by Cox, Comcast and Verizon Fios systems in the Northern Virginia area. We also have three channels that are available only to our schools and government buildings. All channels are programmed 24/7 on an automated basis.

We maintain very high standards for our productions. These, coupled with high expectations from our viewers and staff, require that we keep our technical quality as good as, if not better than anyone else's. We currently have one Emmy Award and have received more than 60 Telly Awards.

We undertook a facility redesign 10 years ago to go fully digital. Our entire studio, field production, editing and master control facilities were gutted and rebuilt, with production operations centering around a new Ross Synergy 3 switcher. That installation got us into the world of digital and served us well, with the Synergy 3 never missing a beat.

However, after a decade of use it was time to move away from SD and into the world of high definition. As part of this second digital rebuild, we replaced our trusty Ross Synergy 3 with two Ross Vision 3 switchers. One of these was installed in our production control room and the other went into our production truck. We chose the Ross products simply because they did what we needed them to do, and they came with a price tag that we could afford.

The Ross Vision switchers provide us with the features our TD's and producers need most in their production work. One feature that's really invaluable is the ability to configure switchers to each operator's individualized needs. This really saves time.

SIMPLIFYING THE ROAD TO HD

Our transition to HD has gone rather smoothly, with the Ross switchers providing one less thing to worry about in the big high-definition picture.

All of the facility design work and installation involved in this second digital makeover was handled by our in-house engineering staff. The Ross Vision switchers gave us no problems during installation, and when it came time to power them up, they worked and have kept on ever since.

We've never second guessed our decision to go with Ross switchers. They've exceeded our expectations in every case, and have proven to be very economical and dependable. Ross's customer support is also the best, and that's something that's difficult to find from a vender anymore.

Todd Blakeman is manager of multimedia engineering at the Sprague Technology Center and has been involved in television engineering for 40 years. He may be contacted at trblakeman@fcps.edu.

For additional information, contact Ross Video at 613-652-4886 or visit rossvideo.com.