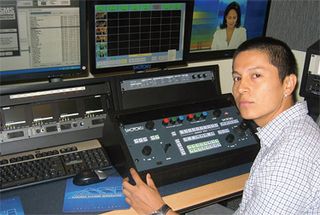 Raul Gomez, NY1 engineer, operates the Shotoku robotic remote control panel.
NEW YORK
Since its debut in 1992, NY1 News—Time Warner Cable's 24-hour news channel here—has been recognized as a leader in comprehensive news coverage of the five NYC boroughs. NY1 News is available throughout New York, and in parts of Westchester, the Hudson Valley, and in New Jersey's Bergen and Hudson counties.

With an integrated, all-digital production system and more than 1,000 hours of computer-based video storage, the facility represents one of the most advanced newsgathering operations in the world.

OPERATING WITH BOTH OLD AND NEW GEAR

Our long-term migration to HD is now well underway, and we've extended our upgrade efforts to include our 10-year old remote camera configuration.

One of my responsibilities as senior director of engineering is designing technical facilities and overseeing integration. Adhering to a multistage timeline presented me with a distinct challenge, as we had to phase in the latest robotic camera support equipment, yet keep the legacy system operational until it's replaced.

We evaluated several options, but found Shotoku Broadcast Systems was the only company able to provide us with exactly what we wanted.

We installed a Shotoku 5-channel configuration with TG-18 and TG-27 remote pan and tilt heads supported by Ti-11 elevator pedestals in the new HD main news studio. We fitted each of our four control rooms with a Shotoku TR-16T control system, each capable of providing seamless remote control of both the new HD cameras and our aging SD equipment. The panels were also customized to control our Grass Valley LDK 3000 high-definition cameras used in the studios.

The system now controls a mix of 18 legacy and new camera channels, with the cameras being used an average of 18 hours per day for anchor shoots.

The TR-16T touchscreen panel is ideal for HD studio environments, such as ours, as it integrates with HD/SDI routers. Our system talks to our main house router—a Grass Valley Trinix—through a Jupiter SI 3000 serial interface.

With the old system, we needed a standalone router for the robotic system to feed into the camera.

The Shotoku control panel connects into a port allowing the operator to switch the router. This integration was easy, as there was minimal cabling necessary. Everything is configured as Ethernet to a switch—just an RS-422 out of the Shotoku camera control box. It was that simple.

As another bonus, the Shotoku system proved to be very easy to learn. Our operators did have to become familiar with the sophisticated features of the new control panels, but since they had been requesting advanced technology, there were no complaints.

We've been using the new system since July, and remained on air during the entire installation. I have to admit that it was something of a struggle, as the control room and studio are used nearly all the time; however, we were able to manage without any major operational disruptions.

All the engineers, operators and users have been very happy with the change and the service we've received from the new gear.

Gunn Isarankura has been with NY1 News for 16 years and currently serves as its senior director of engineering, and is also involved with projects at other Time Warner Cable News operations. He may be contacted atgunn.isarankura@ny1news.com.