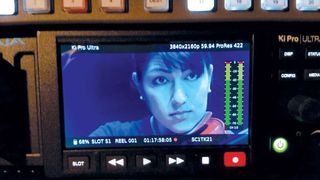 AJA 12GM and FiDO-TR-12G Mini-Converters are attached to all of NWS’ cameras. (Image credit: AJA)

MIAMI—New World Symphony’s mission is simple: to share the beauty of classical music as widely as possible. In today’s digital world where the traditional concert hall model no longer resonates with young modern audiences, it’s critical we make the symphony experience more dynamic and interactive to keep pace with the times.

More than a decade ago, NWS launched the WALLCAST series, using state-of-the-art audio and visual technology to broadcast live concert hall performances via simulcasts to thousands of fans at SoundScape Park in Miami. We recently celebrated our 100th WALLCAST simulcast in October 2019 and finalized upgrading our production to 4K HDR with a range of 12G-SDI technology from AJA. Moving to 4K HDR is critical to elevating the audience experience and enabling NWS to better reach both traditional and modern patrons and donors.

Each 4K UHD simulcast is projected via three Christie 35,000 lumen 4K projectors as a 100x70-foot video. For video capture, we’ve tapped over a dozen cameras and a range of mini-cameras located throughout the concert hall and on-stage—most on robotic heads, but a handful manually operated or on a jib.

AJA 12GM and FiDO-TR-12G Mini-Converters are attached to each of the Panasonic and UHD micro cameras and transform their 3G-SDI signal outputs to single-link fiber 12G-SDI signals that are sent to the production control room. AJA FiDOs in the control room receive the 12G-SDI fiber signals and convert them to baseband 12G-SDI. Six channels are recorded to servers, with four additional recording channels sent to AJA’s Ki Pro Ultra Plus for ISO and backup records. Our upgraded setup is capable of running three versions of HDR content, though we typically simulcast in SDR.

We have more than 40 pieces of AJA equipment integrated into our 4K UHD upgrade, and the 12GM Mini-Converters have proven to be an extremely affordable solution to an expensive problem. For our workflow, we chose 12G-SDI in part because of compatibility with our existing HD cable system and for 12GSDI and HD-SDI interconnectivity with simplified cabling.

To upgrade each of our 13 cameras from quad link to single-cable 12G-SDI would have cost upwards of $10,000 per device. For $895 per camera, we can get the same result by attaching a 12GM quad to 12G-SDI Mini-Converter, which combines and converts signals at the same quality level with no latency. Incorporating AJA’s 12GM Mini-Converters into the workflow effectively upgrades camera output to 12G-SDI at one tenth of the price, saving us nearly $120,000 without any loss of quality in the video output.

LIVE PRODUCTION AND BEYOND

By the time a WALLCAST is complete, my team of 10 video pros has spent nearly 300 hours to deliver 800-900 shots, excluding time spent prior to the show creating graphics and interstitial videos. Prior to each performance, we also review the conductor’s score to determine the final musician counts and precise musical arrangement for each piece, in order to create stage diagrams and storyboards to map out each shot’s framing and duration. With our NWS video systems upgraded to full UHD with Ravenna audio, we are taking video production to the next level and even traveling around the world to produce 4K content for concerts.

Dan Slentz is the chief video engineer at New World Symphony, America’s Orchestral Academy. He can be reached at Dan.Slentz@nws.edu.