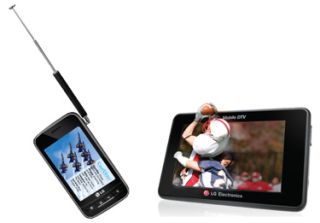 ALEXANDRIA, VA.—Mobile DTV proponents head to the NAB Show with some bragging rights from what they view as a successful "consumer's showcase" of field trials in the Washington, D.C. market begun not long after last year's NAB confab ended. Going into this year's NAB smorgasbord of activities, the number of local stations now streaming Mobile DTV content is approaching 70 nationwide.

Mark Aitken, director of advanced technology at Sinclair Broadcast Group and an executive committee member of the recently formed Mobile 500 Alliance, said his group will use the NAB Show to hold a general membership meeting in order to lay out a business proposition that he hopes will be suitable to all.

At the NAB Show Mobile DTV Pavilion, LG Electronics will show two new Mobile DTV products: Tweet-TV (L) and an LG 3D Stereoscopic glasses-free Mobile DTV handheld device. "Everybody's got their own view of why mobile TV schemes seem to have gotten stuck in the mud, and the recurring themes surrounding it have been things like 'what's the business?' and 'why would I invest fifteen- or twenty-thousand dollars to add mobile to my business?" Aitken said. "There really needs be a business opportunity [defined] before anyone will invest their capital and give up some of their bandwidth. At NAB, we'll be going into some of the nuts and bolts of mobile, and why we see it as a multi-billion-dollar revenue opportunity over the next few years. And we'll discuss how we move forward."

While large amounts of video content from broadcast and cable news networks (and an increasing number of local stations) are now available via mostly free apps for popular portable devices, Aitken doesn't see the ongoing trend as a threat to mobile. "Mobile DTV doesn't compete with smart-phone and tablet apps," he said. "Rather, I see it as complementary. We have to remember that from that OMVC consumer showcase [field trial] last fall, live local news proved to be the most popular content for users. And there are others services including premium VOD that can brought to the fore with mobile, too, as well as local and live."

One big learning tool, he said, created by the D.C. exercise was discovering that "mobile primetime" is not the same as "network primetime." For participants in the consumer showcase, their primetime turned out to be noon-to-four p.m.

Anne Schelle, executive director of the Open Mobile Video Coalition, says now is the time for Mobile DTV to move to "the next level of widescale deployment." She recommended broadcasters stop by the Mobile TV Pavilion at 4036 North Hall of the LVCC (near the Hilton entrance). More than a dozen companies are expected to show their wares this year, including LG Electronics, Hauppauge Computer Works, DTVinteractive, Pixtree, Triveni, Crest Technology, Decontis, and Axel Technology.

The pavilion will display many of the new products first shown at CES in January, including several hands-on demos, as well as the added resources of the Mobile Content Venture and Mobile 500 Alliance. "We plan to showcase some new consumer receivers in an 'experience zone' to highlight how consumers are already enjoying the benefits of digital TV service on-the-go," said OMVC spokesman Dave Arland. "Attendees will find the new Valups Tivizen receiver that plugs directly into an iPad and iPhone. Cydle will show its iPhone cradle for [mobile] reception, and they'll be portable Wi-Fi devices on display from Crestech," Arland said.

LG Electronics Vice President John Taylor said because Mobile DTV is a very flexible technology, his firm will be demonstrating how 3DTV can enter the game. "We'll be showing how 3D content can be transmitted and received via a broadcaster's Mobile DTV signal to a handheld TV device that doesn't require special glasses," said Taylor.

LG will also show what may be Mobile DTV's first social network application. In collaboration with Roundbox, Taylor said LG will demonstrate a mobile application that allows viewer "Tweets" to be displayed interactively on a Mobile DTV receiver simultaneously within programs. A mobile DTV transmitter from Harris will deliver the Tweets as data files and display them in a transparent panel on the LG mobile screen (which is a prototype LG Android smart-phone).

At least five sessions within various conferences (at press time) will focus on Mobile DTV—including Sunday and Thursday sessions in the Broadcast Engineering Conference on implementation and improving reception, respectively. A Super Session on Monday afternoon with industry analyst Gary Arlen and Saul Berman of IBM will probe Mobile DTV's immediate and long-range future, and the Content Conference holds its own session on Monday morning. Finally, the one-day Media Business Conference on Wednesday at the show will delve into marketing, promotion and distribution ideas.

Rights issues are often front and center for content providers whenever new media platforms crop up. In March, Time Warner Cable temporarily removed 17 of 32 channel streams it was providing for its existing cable subscribers on its own iPad app (accessible only on a user's home WiFi network), because of what TWC said was "unusually high demand." TWC returned the missing channels about 24 hours later, but some content providers took the opportunity to voice their displeasure that cablers or anyone else would add new media platforms for retrieving program content without seeking additional rights.

Thus, would-be Mobile DTV broadcasters at the NAB Show will be briefed on the so-called "Trust Authority" established to manage the industry's conditional access structure for mobile. "This is a critical ingredient to allow Mobile DTV to be offered as both a free service, or on a subscription basis, for streaming premium and VOD content," said OMVC chief Schelle.

A resource for locating current ATSC Mobile DTV signal contours in the continental United States is available (at the Signal Map tab) at www.OMVC.org.