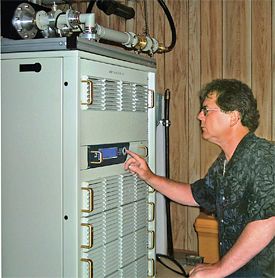 Bob Jenkins
CHARLOTTESVILLE, VA.—Selecting digital replacements for our 15-year-old translators has been quite an experience. As at most television stations nowadays, acquisition cost is very high on the list of when considering new gear; however, dependability is also quite important, as my two translator sites are on mountain tops with roads that aren't exactly "Interstate highway system" quality. Under the best of conditions, it takes about one-and-a-half hours to reach either translator site from our studio.

A major concern in a broadcaster's mind is that viewers tend to have very long memories when it comes to stations going off the air in the middle of their favorite programs. This should give us all cause for careful consideration when it comes to choosing new equipment.

In shopping for our replacement translators, we received quotes from several vendors and also obtained testimonial statements from their customers. However, it all boiled down to an on-site demo that I received from Linear. After seeing their technology in action, I decided that my next purchase would be from Linear.

Their AT7001 exciter was especially impressive, as it could do corrections in a matter of seconds and was front panel-controllable. The pricing was also very attractive and their delivery time fit my schedule.

Our first new translator installation was a 1,000 Watt model, which went on line last January. Placing the new unit in service turned out to be a very smooth exercise.

The customer service people at Linear were very helpful in paving the way to get the new translator on the air. They sent out documentation before the unit was delivered and then followed up with us after the installation. This translator ultimately serves about 65,000 viewers.

The second transmitter selected was a 1,500 Watt model and its installation was just like the first unit—completely uneventful. It's serving about 67,000 people. I performed field strength readings for both sites, and found the coverage to be fantastic.

Even though mainline TV has been digital for two years now, it still takes some getting used to. Since the digital translators went in, we've had several calls from viewers wanting to know where our signal went. It's usually just a matter of telling them to rescan; once that's completed they're happy to see the quality of the picture and to have three channels instead of just one.

Each Linear translator comes with an IP address, so I can now do remote monitoring. This is another really big plus.

I'm also very impressed with the air flow in the Linear units. While this may not seem like a big deal, but reliable long-term transmitter operation requires everything to be kept at low operating temperatures. Unless heat from the amplifiers can be exhausted, it's hard to cool the equipment. The Linear translator transmitters in this respect are far superior to others that we've used in the past. I think that our new Linears are going to be keeping me and my viewers happy for quite a while.

Bob Jenkins has been with chief engineer for WVIR-TV for the past 14years. He may be contacted at bjenkins@nbc29.com.