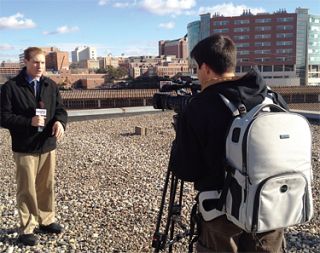 KPTM photographer Eric Green captures station reporter Clark Young in a rooftop setting with the TVUPack.
OMAHA, NEB.: KPTM is part of the Titan Broadcasting group, and is the Fox affiliate here, serving this market for more than 25 years. In 2010, we made a strategic shift in news philosophy, with a goal to increase local news content and maximize coverage while controlling costs. To achieve this, the station created a next generation news model for delivering the most local news to the market.

In order to generate increased content, deliver a live newscast, and maintain breaking news capability, we took several strategic steps. First, we partnered with the Independent News Network (INN) in Davenport, Iowa to host the production facilities. Locally, we increased our "street staff" from three to eight video journalists to increase market coverage and generate local content. The local stories that we produce are sent via FTP to INN each evening and are also delivered live each night in a 9 p.m. news program. We also wanted to deliver news live from the field without having to rely on aging microwave trucks. We explored several alternatives, and eventually discovered the TVU Networks TVUPack.

The TVUPack is primarily used for breaking news; however, it's also used to provide coverage of other live events. For example, the station used TVUPack for the 2011 College World Series for breaking news, press conferences and capturing highlights. During the live broadcast from the stadium, a severe windstorm hit Omaha, disrupting the event. While others had to shut down their OB vans due to safety concerns, but we were on the scene with the TVUPack streaming back breaking news.

The TVUPack goes live with the push of one button, making it extremely easy to use for our reporters in the field. They're able to focus on capturing the news without having to configure any equipment. The interface on the receiver end of the system is equally user-friendly in that it allows our master control personnel to diagnose issues and adjust latency and bit-rates to deliver the best picture under available network conditions.

NOT JUST FOR LIVE RELAY

Additionally, the station has discovered an added benefit with the TVUPack's hotspot capability. When we're not using the unit to transmit pictures, one of our video journalists can use it to capture a story, edit it, and then FTP it to the production facility, greatly enhancing our newsgathering efficiency.

Although we haven't experienced any major issues with our TVUPack, it's nice to know that TVU's support team is top-notch. Our phone calls to the company's tech support group are answered promptly and any issues that we've had were quickly resolved. TVU's staff is also receptive to feature suggestions.

Ultimately, the ability to cost-effectively broadcast live has transformed KPTM's news strategy in an efficient manner, while keeping us ahead of our competition in coverage of breaking news.

For additional information, contact TVU Networks at 650-969-6732 or visit www.tvupack.com.