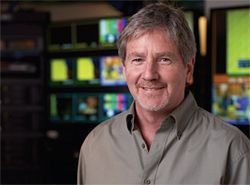 Chris Phillips
SAN MATEO, CALIF.
KCSM-TV operates in the fifth largest U.S. TV and radio market, broadcasting 24 hours a day to San Mateo and the surrounding area. Until recently, we were affiliated with the PBS network; however, our KCSM management team realized we needed cable to survive and moved to a mainstream broadcasting model last year. This was a transition in which Avid's Sundance Digital Titan broadcast automation system played a significant role.

With the decision to go mainstream, we needed to undergo a thorough facility and master control room overhaul. We evaluated a full range of broadcast automation solutions, including those offered by a number of leading manufacturers. After considerable investigation, we found that while each of the vendor's systems offered unique advantages, not all had the ability to provide adequate channel coverage—only the Titan system delivered the comprehensive set of capabilities we were looking for.

Titan's innate ability to move files from the server to archive has proven to be extremely valuable. Our previous asset workflow had been inefficient. Because our station rarely broadcasts programming as a "pass-through" event, content was recorded to tape and placed in a relatively large library until the date the asset was scheduled for broadcast.

With Titan, we've made a quantum leap in efficiency, automating the movement of files back and forth without a middleware system to facilitate those transfers. This not only allowed our operators to crew our productions, but also enabled KCSM-TV to reduce our staff of eight traffic and broadcast specialists to five. Additionally, the Titan system has streamlined our workflow to the point that we were able to reassign some of our master control engineers to other technical areas. And the quality of the Titan applications has afforded us a high degree of confidence in our new workflow. We knew we needed a mainstream, robust, fault-tolerant automation solution, and that's exactly what we found in Avid.

As with any long-term, enterprise-wide technology investment, service and support were also key factors in our decision-making process. And we haven't been disappointed in this area either. The Avid support team has provided complete back-up and support of advanced installation processes and all follow-on servicing required. Even after we passed the warranty period, they've made sure that the station has continued to receive what's needed to keep workflow moving smoothly.

Chris Phillips is a broadcast engineer for KCSM-TV and KCSM-FM, which is licensed by the San Mateo County Community College District. He has been with the operation 1977. He may be contacted atcphillips@kcsm.net.