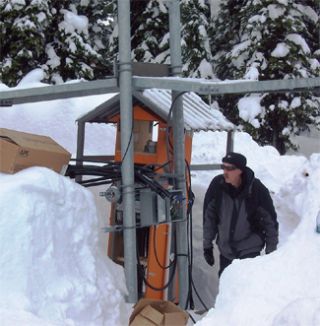 Mark Huller surveys the ruins of the KTMF transmitter facility.
MISSOULA, MONT.—At 6,821 feet above sea level, TV Mountain in western Montana is an ideal transmission point for stations serving this market of more than 113,000.

The secluded setting also has its challenges, especially in the winter when snow levels mount. Transmission sites are accessible mainly by snowmobile, and the hazards that accompany the consistent harsh winter weather can lead to devastation without warning.

This became a reality early on Feb. 22, 2011, when snow and ice collapsed the roof of our transmitter building. It took just a few seconds for the overburden to silence the station and keep it that way for 15 days.

TRANSMITTER WAS A TOTAL LOSS

The heavy snow, compacted with ice, essentially destroyed the building. We spent the next two days salvaging everything we could, but the transmitter was finished.

Mark Huller, director of engineering for KTMF owner Max Media of Montana, put in calls to several transmitter manufacturers. Harris was first to respond and quickly shipped a Maxiva UAX air-cooled transmitter to the site within a week—long before any other supplier could promise.

The Maxiva was providing us with an on-air signal by March 8, but at a reduced ERP of 25.2 kW. We were so pleased that we ordered a UAX that could bring things up to our full licensed ERP of 92.7 kW, and also opted for dual Harris Apex M2X exciters for added redundancy. Once we're back to full power, the current transmitter will become the backup.

The Maxiva UAX is essentially a low-power solid-state transmitter with all the bells and whistles of a high-power model. Its compact design and signal quality were most important early on, as we needed a transmitter that was easy to transport in winter weather and still could make enough power to serve most of our viewers.

We put the replacement transmitter together while the snow was still falling, installing it in the bottom half of a specially-built rack and placing it in a temporary RF enclosure.

The UAX, working in tandem with the built-in Apex M2X exciter, is producing a much improved signal to our viewers.

The transmitter's remote monitoring capabilities allow us to log in from anywhere to monitor adaptive correction, power, internally generated waveforms and other levels. The UAX also provides readings for fan speeds, PA module temperatures and other parameters that are important in an air-cooled transmitter.

Harris customer support was exceptional throughout the process. A component was damaged upon initial delivery, which delayed the installation. Harris customer support quickly determined the problem and shipped out a new part, subsequently talking us through the setup and calibration process. Shipping damages are always a risk, and frankly we're not sure how they cranked out a transmitter so fast in the first place.

I believe that the Harris transmission group set a new standard for emergency support, getting us back on the air far sooner than we initially expected. We are looking forward to delivery of the high-power Maxiva UAX so we can once again serve our entire market, with improved signal quality.

Roger Hatcher is engineering supervisor at KTMF Television. He may be contacted at rhatcher@maxmontana.com.