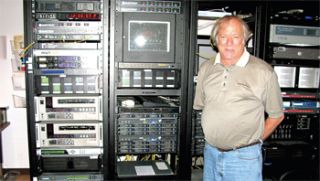 Moe Strout
TYLER, TEXAS
In keeping with the broadcast industry's transition to digital and high-definition television, KYTX set a goal of providing both locally- and CBS network-produced HD to our viewers.

In addition, we wanted to transition our entire on-air operation to a file-based system. This was in keeping with the philosophy of our parent company by taking full advantage of the opportunities offered by state-of-the-art digital technologies.

From the beginning, our search for a server-based system that could handle our high-definition goals had several main priorities. These included fully automated master control features, excellent handling of high-definition media, and an affordable price tag. Happily, we found that we could meet all of those priorities with the selection of the MediaFire HD System from Digital Broadcast.

SYNDICATED PROGRAMING IS A CINCH

The MediaFire has given us all of the feature set that we desired. One especially useful feature is its handling of syndicated material delivered by Pathfire. Syndicated programming received into the Pathfire server is automatically transferred to the MediaFire server, already segmented and ready to air with no format conversion or program timing required. Also, the syndication can be specified to be prepared with no barter, single barter or double barter. Once these rules are set in MediaFire's Asset Management software, the received syndicated program is prepared in the same manner until the system is instructed differently. This feature alone has saved our operators hours of work—time that they can spend on other tasks and attending to what is going out on-air.

The MediaFire also features an automated interface with DG FastChannel. Along with the Pathfire interface, this has significantly reduced the time previously required for real-time baseband transfers.

For material that comes in from other sources and requires segmenting, Digital Broadcast provides a handy MediaFire Segmenter application that is significantly easier and less complicated than the procedures we've used in the past.

MediaFire's automation not only includes automated on-air playout, but also automated scheduling of satellite records, control of our routers and an interface to our OSI traffic system. Our MediaFire system has the ability to ingest both SD and HD content, as well as providing both standard- and high-definition outputs. And the HD outputs can provide simultaneous playout of material in both HD and SD.

Even with all of its features, the MediaFire system is very cost effective. The automation software is totally integrated into the server hardware, and as a result, this has made the price attractive and has also ensured that the system does everything it's supposed to do and to do that well.

I will admit that transitioning to the MediaFire system was a bit challenging for us in the beginning, and we had to work through some issues with the company. However, through it all, Digital Broadcast's support was nothing short of tremendous. There was not a time that we did not get help from Digital Broadcast when we needed it.

Our MediaFire system has helped us achieve the goal we set for HD broadcasting—being the first and only station in our market to be broadcasting completely in high definition.

For additional information, contact Digital Broadcast at 352-377-8344 or visitwww.digitalbcast.com.