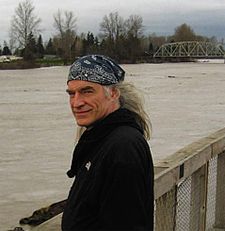 "Ice Bears of the Beaufort" is the first of our three Arctic documentaries, and it's also the first and only documentary on Alaskan polar bears. It reveals a little-known truth—that the coastal and near-shore region of the Beaufort Sea is a polar bear maternity ward. This region contains the highest concentration of polar bear denning habitat in North America and is also the region being leased for oil and gas development.

The need for full multichannel audio and 1080 24p HD support in the PolarArt Productions edit suite is essential and functionality, service and reliability are the real deal makers or breakers on any gear in this remote location. This is why, three years into the shooting of "Ice Bears," I bought my first Blackmagic Design product—the Multibridge Extreme. It is an extremely versatile tool in our operation.

We recently acquired a new Multibridge Pro and have been amazed with its performance too. The HD-SDI interface is great, and as a standalone converter, it's a welcome bridge between the camera's HD-SDI output and the field monitor. Its instant booting, virtually noiseless operation and endless connectivity all are very welcome pluses.

GETTING READY FOR 2K WORKFLOW

This year, we're planning to introduce the RED ONE to our lineup and will be performing our finishing operations in 2K. For this 2K workflow, the Multibridge Pro is already there.

You wouldn't think that this far north you could find a full high-defiition edit suite, but here we are, on the edge of the continent, running such an operation. It's built around a Mac Quad G5, MacPro dual core, along with a variety of Sony monitors, an Apple Cinema Display and a Sony multichannel audio amp. The feed to my Sony monitors comes from the HD analog component outputs of the Multibridge Pro.

Following ingest of raw footage, all working stock is transcoded to the Apple ProRes HQ codec. We use Apple Color for grading in either ProRes or uncompressed 10-bit, depending upon client specs.

The color grading of "Ice Bears of the Beaufort" would have been impossible without an interface capability such as that provided by Multibridge Pro. In this remote location, the reliability and flexibility of Blackmagic Design products have become critical links in our workflow here in this very remote outpost of civilization.

Arthur C. Smith III is an upstate New York native, but now calls the Arctic his home. His current project involves production of a series of documentaries about the Arctic. He may be contacted atArthur@polarartproductions.com.

For additional information, contact Blackmagic Design at 408-954-0500 or visitwww.blackmagic-design.com.