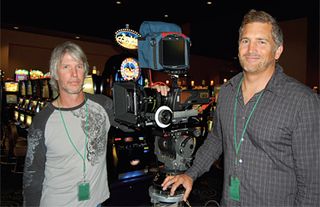 Jim Matlosz (L), director of photography and Richard Yelland, director, use OConnor's 2575 Ultimate head on location at the Table Mountain Casino.
LOS ANGELES
When director Richard Yelland called me to do another set of 30 second spots for the Addy Award-winning Table Mountain Casino's "That's Winning" campaign, he said that we'd be "upping the ante" a little. The people at Abe Froman Productions and The Glenn Group Agency wanted to add images of food preparation, along with the food court and also some big concert footage to the ad series prepared for the Table Mountain Rancheria Band of Indians' Casino, near Fresno, Calif.

The concept behind the spots is focused on that moment when someone hits the jackpot and the world around crashes down around them into slow motion (in reality, it's only a matter of seconds, but seems to last a lifetime).

My first choice for camera support in this assignment was my OConnor 2575 Ultimate head. At the beginning of the shoot while I was chatting with my first assistant cameraperson, I was unconsciously flipping the pan and tilt locks on and off on the 2575. This steered our conversation around to the OConnor head itself. We both acknowledged that in the course of our careers we had tried a wide variety of other heads from different manufacturers, but always returned to OConnor products, as that company makes some of the most versatile and useful fluid heads.

LOTS TO CAPTURE IN A VERY SHORT TIME

During our shoot, I was impressed that the director was able to get the full range of emotion out of the talent in such a short duration. And the OConnor Ultimate head lived up to its promise in allowing me to follow and capture the fast movement of the ad libbing talent.

With the OConnor head, once you have the settings figured out, it's very easy to jump on the dolly at the last second, and with just the flip of a wrist, unlock the pan and tilt—without looking—and capture a great shot. I really love operating camera, but I also get full of energy on a set, and I'm not able to just sit and point and wait. I'm on and off the dolly a hundred times an hour, and it's nice to know the camera head is poised and ready for quick execution. That was a must with the Table Mountain spots.

I've been using OConnor heads since I discovered their model 50 while I was in college. Even back then it was considered the industry standard. After working with video-type heads, I can confidently state OConnor has a better feel and support for cameras, and the pan and tilt fluid adjustment is superior to all others.

After college, I used the OConnor 100 when I was doing visual effects (VFX) work and the OConnor 2575 for high speed. I've also taken the Ultimate head to Alaska filming a whale hunt for an IMAX project. The unit survived an incredible range of temperatures with no problems. I literally consider OConnor part of my crew. I simply wouldn't shoot a project without at least one of their heads in my camera package.

Jim Matlosz makes his living shooting commercials, documentaries, and features, as well as writing articles for trade magazines. He is known for his high speed cinematography and also does VFX, stop motion and live action work. He may be contacted atwww.dpmatlosz.com.