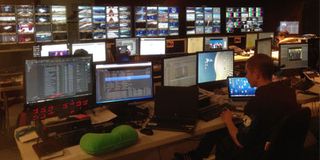 SOCHI, RUSSIA—Panorama’s production infrastructure is in many ways a case study on how to go about producing a lot of content from a big event in an efficient, thoroughly modern manner.

EVS XS Servers in Panorama’s Sochi facility Also known as ANO Sports Broadcasting, Panorama was formed in 2009 to produce programming for four Russian broadcasters at the Sochi Games. The equipment rollout only began a little over two years ago, which allowed the company to broadcast a series of important trial events held in the run-up to Sochi. Looking ahead, additional important events are on Panorama’s radar, including the 2016 Rio Games, for which it holds broadcast rights.

Panorama had one of the more advanced live production workflows at the Sochi Games, with more than 500 interconnected HD channels between presences at the International Broadcast Center (IBC), the venues and a large Moscow facility.

IMPRESSIVE OB FLEET
On the OB side, the company established one of the more impressive fleets on the planet over the last few years, with three 24-camera OB vans, four 16-camera trucks and five 10-camera units seeing action in Sochi and the venues.

Master Control at the Sochi facility of Panorama

In both the 24- and 16-camera OBs an EVS IPDirector production asset management suite was used for scheduling incoming feeds, live logging, browsing and file transfers. EVS’s IPEdit was also deployed for live editing.

Beyond having an OB truck at every venue in Sochi, Panorama’s presence at the IBC could not be missed, where its Large Mobile Office (LMO) made up the on-site half of a split production. The other half was the Moscow side of the equation; the Moscow Logging System was actually larger and had more personnel than the Sochi facility.

Inside a 16-camera OB The LMO was equipped with 18 EVS XS servers for ingest and playout, while the Moscow rooms worked from a single XS. An EVS XStoreSAN was used for nearline storage of hi-res content and as high performance online storage for direct media ingest.

All content was recorded to main and back-up storage in a hi-res format, in this case Apple’s ProRes format to feed Panorama’s FCP editing stations. Three lo-res H.264 recordings were also made: a main, a back-up and one sent to Moscow for logging. Transcoding was via EVS’s XSquare, with XT Access serving its role as an automated way to distribute content to multiple destinations in a variety of formats.

ENG content — in this case mainly from XDCAM Bluray — was ingested via ENG Soft, a simple and direct method of importing ENG files to Avid in post. Xedio CleanEdit was used for on-the-fly nonlinear editing supporting the creation of storyboards.

ENG content on P2 cards was ingested in to the workflow via EVS Xedio Dispatcher. All logging was done from Moscow, where 30 EVS IPDirector stations allowed personnel to create around 15,000 logs per day during the Games. Basic playlists with logged metadata and basic transitions were sent back to the Sochi SAN as EDLs only to FCP, or as consolidated clips to OB vans. FCP editing in Sochi was done directly on the SAN.

Bringing it all together to an extent are two software products that allow creatives to monitor and use all the logged content: IPBrowse and IPWeb. The former might be used by journalists and assistant producers to search nearline storage from a connected desktop.

IPWeb stations allow the same kind of access to lo-res content via an Internet connection. Each of the four partner stations that formed Panorama used this software extensively, and it was used by the OB vans to enable access to the entire Media Office content, and transfer of corresponding hi-res to local XTs in the trucks.