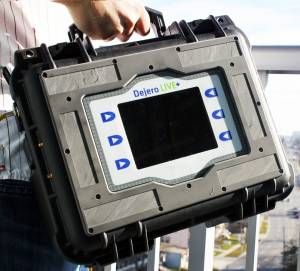 At the 2013 NAB Show, Dejero will introduce the LIVE+ VSET, a 1U vehicle-mount version of its Dejero LIVE+ 20/20 Transmitter.

Designed for use with satellite and microwave trucks, the adaptive bit-rate encoder on Dejero's LIVE+ VSET reduces the latency and improves the reliability of satellite video feeds. For instance, during rain fade and other atmospheric conditions that cause Ka-band satellite bandwidth to decrease, the Dejero LIVE+ VSET will automatically pick up the drop-in bandwidth by transmitting over the cellular networks. Even in ideal conditions when the bulk of data is being sent over satellite, the LIVE+ VSET takes advantage of the lower latency of a cellular connection to check for errors and send missing packets — thus leading to an overall decrease in latency on the entire Ka-band system.

Also at NAB, Dejero will introduce an Android version of its LIVE+ Mobile App, which enables both traditional and online broadcasters to transmit high-quality HD or SD live video from select Android phones and tablets. Announced last summer for iOS devices, the LIVE+ Mobile App is capable of bonding multiple wireless signals to deliver high-quality video from the street to the television or Web. Using the same bonded cellular technology as the Dejero LIVE+ 20/20 Transmitter, the LIVE+ Mobile App aggregates both the WiFi and cellular connections of the iPhone, iPad and now Android device. The result is a higher-quality live video transmission with lower latency than a single connection would provide. In addition, the LIVE+ Mobile App now features support for interruptible foldback (IFB), enabling one-way, real-time communications to be sent from the studio to an earpiece worn by the on-air talent.