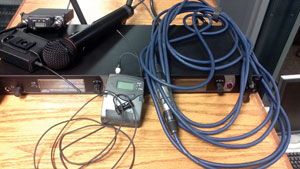 One of these things is not like the other. Wireless microphone systems have their own set of potential problems, but with adequate preparation and some troubleshooting, they can be overcome.

Recently, a colleague of mine traveled to Seattle to do a field production. He and his assistant spent the morning testing their gear, including the wireless microphone system mounted on the back of the camcorder, while setting up their shot. The wireless microphone setup provided for dual mics, but only one lavaliere was needed for this assignment. Everything worked fine prior to the shoot, but when the talent arrived and was miked up, swishing sounds were present in the microphone audio. Because the videographer did not have the time to troubleshoot the new system, he simply finished the shoot with a standard wired microphone.

By definition, a wireless microphone system is simply the replacement for the audio cable connecting the microphone to the sound system. It is a microphone with an attached or built-in radio transmitter that sends to a nearby receiver tuned to the same frequency. The receiver’s output is connected to the camera or studio sound system. This configuration eliminates the microphone cable, giving the talent freedom of movement and location.

Unfortunately, achieving this result is sometimes not so simple because of external radio interference and the difficulties sometimes caused by close channel spacing. To overcome these issues, engineers and shooters need to be prepared to address a variety of obstacles, some of which can be tough to eliminate.

Wireless does not mean interference-free

In a typical analog wireless system, the transmitter modulates the audio signal with the tuned radio frequency using wideband FM modulation while the receiver demodulates the received radio signal back to the audio signal. If you think about it, the scheme is reasonably close to the same process used for FM radio transmission. The problem is achieving 100dB dynamic range, which is considered the minimum for high-quality audio, and staying within the 200kHz bandwidth limitation.

An unprocessed audio signal transmitted using FM and keeping within the legal bandwidth has a dynamic range of about 50dB. This is because the dynamic range is directly proportional to the amount of FM that can be applied to the carrier. To increase the dynamic range, analog wireless microphones use a process called companding, a combination of compressing and expanding. Compression is achieved by using a variable gain amplifier (VGA) or at the transmitter. This circuit compresses 100dB input range by a ratio of 2:1 to fit within the 50dB dynamic range. Expansion occurs at the receiver, again using VGAs to restore the original 100dB dynamic range. Further signal-to-noise improvements can be obtained by pre-emphasizing the audio at the transmitter input and then de-emphasizing it (reversing the process) at the receiver.

The audio also must be limited to prevent over-modulation and distortion. These processes improve the audio quality but at some cost of high-frequency roll off; it is necessary to roll off lower frequencies that would interfere with the companding circuitry. Therefore, frequency response is typically about 50Hz to 15,000Hz for analog wireless systems. Professional analog wireless systems are able to achieve a better frequency response, perhaps out to 18,000Hz, by using more sophisticated circuitry in the companding and pre-emphasis stages.

Digital hybrid systems use analog FM transmission combined with DSP to enhance the system’s audio. It replaces the traditional analog companding circuits in the transmitter and the receiver. Using DSP achieves a flatter frequency response through the use of digital techniques such as predictive algorithms. It also can increase the dynamic range and decrease companding artifacts (distortions).

An all-digital system digitizes the input signal in the transmitter, and it stays in the digital format until the receiver output. With the typical digital wireless systems, an analog-to-digital (A/D) converter is at the input of the transmitter, next is the DSP with three main processes, where the digital signal is digitally encoded in the codec channel coding in the channel coder (error correction and synchronization), and finally the modulated signal constructed in the digital modulator.

In the receiver, like the transmitter, three main processes are then performed in the DSP. First, digital demodulation takes place in the digital demodulator, followed by channel decoding in the channel decoder, and then digital decoding in the codec. Finally, if not connected to a digital audio system, it goes through a digital-to-analog (D/A) converter to the analog audio output of the receiver.

Instead of compressing the audio signal, most wireless digital systems use a data compression scheme using an algorithm called a codec (code-decode) similar to MP3. For digital wireless systems, they are specialized codecs like the APT-X lossless codec that have low latency and can operate in a special hybrid mode for applications in communication that are subject to bandwidth constraints. The result of the high-performance lossless compression is after decoding the compressed data stream; the original uncompressed audio is restored in high quality.

The advantages of digital wireless systems include wider audio bandwidth, no intermodulation distortion and the availability of more operating frequencies via closer spacing.

One of the disadvantages of wireless microphone systems is the potential for interference. There are three basic types of interference: radio frequency interference (RFI), intermodulation (IM) and electrical interference.

In the example earilier, the videographer’s system used diversity technology, which means each receiver has dual antennas. A diversity system helps reduce multipath caused by RF reflections, which cause fluctuations in received signal strength and fading. Nondiversity receivers have only one antenna. Intermodulation arises from the combination of two or more signals at different frequencies within nonlinear circuits and can occur when transmitters are operated close to receivers or other transmitters. IM does not occur in digital modulation, which is one of the advantages of digital wireless systems.

Today, nearly all wireless systems provide frequency agility instead of the single-frequency-crystal-tuned systems of the past. Typically, wireless systems are tunable across a specific band of frequencies. Manufacturers even offer software for frequency coordinating to aid in finding available frequencies based on your location. Frequency scanning can also be helpful in finding a clear, available frequency.

The shooter in my story did have a frequency scanning options, but he was not sufficiently familiar with the feature to quickly identify and resolve the noise problem. It was, therefore, quicker to fall back to older, but reliable, wired microphone technology to complete the shot.

There are some sophisticated wireless systems available. Intelligent wireless systems use 2.4GHz back channels to communicate with the transmitter and the receiver in a two-way data link. This permits the user to actually change operating frequencies on the fly. With remote control, the user is able to change audio gain, transmitter power and even transmit frequency on some systems. In addition, some wireless systems’ receivers can recognize an interfering signal on the audio link and tune both receiver and transmitter to a clear channel with little signal interruption.

Of course, the price and complexity of convenience increases with each feature (even more so if its digital), and such systems are not needed for most live camera stand-ups. I am still waiting for the day when wireless microphone systems can reliably match wired microphone performance at a wired microphone price.