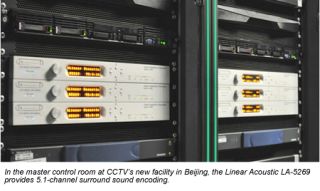 "The Linear Acoustic LA-5269 Dolby Digital/Plus transcoder plays a critical role in the MCR at CCTV's new facility," said Xu Gangming, director of CCTV's transmission department. "It has not only simplified the system structure, but also provides stable, high-performance 5.1-channel surround encoding for our HD channels. It fits the rigorous requirements of handling audio metadata and supporting the top quality program production and distribution we demand at CCTV."

The LA-5269 can encode, decode and transcode the most popular multichannel audio formats in use by television broadcasters. Metadata is supported via an RS485 connection and can be extracted from an applied HD- or SD-SDI signal. Dual redundant internal power supplies are standard; SNMP and Dolby E decoding are available options.