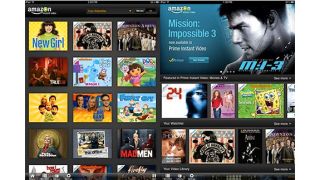 Mobile TV on tablets is heating up, and this week things got a little toastier as Amazon launched its new Instant Video app on iPad. Going head to head against Netflix streaming is one of Amazon’s main goals, but does the service have enough momentum to gain traction in the mobile video space?

The video app is geared around Amazon’s Prime service, where subscribers can sign up for $79 a year and get access to thousands of movies and TV shows that can be streamed through various devices, including now the iPad. Customers can also purchase and rent individual videos, now totaling more than 120,000. The app works much like Netflix; you can browse though the content and then add selected programming to your Watchlist, similar to the Netflix Queue. Because the service takes advantage of Amazon’s Whispersync feature, you can start a movie or TV show on your iPad and then continue it later on your Mac, PC, Kindle Fire or compatible streaming TV device.

The app does have one key drawback, which has more to do with the way the Apple iTunes store is set up. Apps in the iTunes store can offer in-app purchases, but Apple must get a cut of the revenue. App developers can choose to not offer an in-app store at all, and that is what Amazon has done. This is no different than say the Kindle app, which on iOS does not have an in-app store or a way to purchase books from inside the app. You have to move to the website to do that. The Instant Video app from Amazon does not offer any store, so you need to jump to the web to rent or buy specific videos — although you can access your wish list from inside the app.

Apple has so far not been flexible with its parameters, and it does make economic sense that if you want to use iTunes and the app store to offer an app with in-app purchases, Apple will get a cut. Unfortunately, when a company decides to forgo the in-app store, the convenience factor goes out the window. The whole point of an app is that it can be a self-contained viewer and store, but this time around the Amazon Instant Video app is for viewing only.

Aside from that, it’s a good first step. Amazon also recently released its Instant Video app to PS3 as well, and seems focused on covering as many bases as possible. Netflix has had a substantial several-year head start, and is now producing original streaming programming (I cannot wait for the upcoming “Arrested Development” season), but Amazon is working hard to sign up more and more studios. Competition is always good in the mobile TV and video space, and we are sure to see even more all-you-can-stream options on tablets. For now, Amazon makes a compelling argument, with thousands of shows and movies for a really low price of $79 per year.